Uncle Sam - the personification and symbol of the United States and the descendant of a Greenockian!

Samuel Wilson, is generally considered to be the original Uncle Sam.  Samuel and his brother Ebenezer were employers of over 100 men in their slaughterhouse and meat-packing business in Troy, New York.  Samuel Wilson, according to the "History of the City of Troy" by A J Weise -

"Being one of the first settlers, and besides having a kind and benevolent disposition, he won the         esteem and affection of everybody in the village, and was more generally designated as Uncle             Sam than by his proper name."

During the 1812 - 1815 war they were contracted by Elbert Anderson to provide beef for soldiers stationed at Greenbush, New York.  All provisions had to be stamped, and the initials E.A.-U.S. appeared on the barrels of meat from the Wilsons.  Seemingly a soldier asked what those initials meant and the reply, from a local, was Elbert Anderson and Uncle Sam.  The name caught on and any other wagons or barrels carrying the initials U.S. was deemed to be from Uncle Sam.

According to Albert Matthews in his book "Uncle Sam", the term appeared in Bartlett Dictionary of Americanisms in 1848 and has been in use ever since.  This recruitment poster from World War I by the artist James Montgomery Flagg (1877 - 1960) is probably the image most of us have in mind when we think of Uncle Sam. 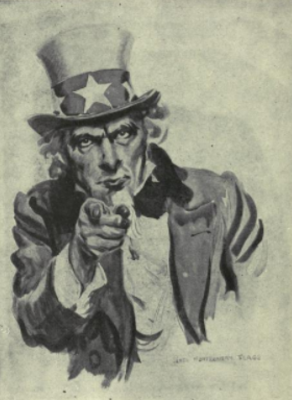 So what's the Greenock connection?

Most sources name Samuel's grandfather as Robert Wilson from Greenock who settled in Massachusetts.  His son, Edward Wilson was Samuel's father.  Samuel was born in West Cambridge (now Arlington) on 13 September 1766 and moved in his early twenties with his brother to Troy in New York, on the Hudson River.  He started out as a brick maker before owning slaughterhouses.  He married Betsey Mann of Mason, New Hampshire, and had four children.  He died on 31 July 1854 at Troy and was buried originally at Mt Ida Cemetery in Troy.  In 1858 he was re-interred in a family plot at Oakwood Cemetery, Troy.

Posted by The Greenockian at 14:22 No comments: