Surgeon in the dungeon

A very interesting obituary from November 1821 caught my eye recently.  It read -
"At Greenock, after a lingering illness,
John Lawmont, Esq. surgeon, R.N.
He was surgeon of the Vincejo at the period of her capture,
and the confidant of the lamented Captain Wright
in The Tower of the Temple in Paris,
and the last friend who had access to his dungeon."

So, who was John Lawmont (sometimes written as Lamont)?  What was the Vincejo and why was she captured?  Who was Captain Wright?  What was the Tower of the Temple in Paris?  Why was he in a dungeon?  Lots of questions which led to a fascinating story of espionage and intrigue during the Napoleonic Wars. 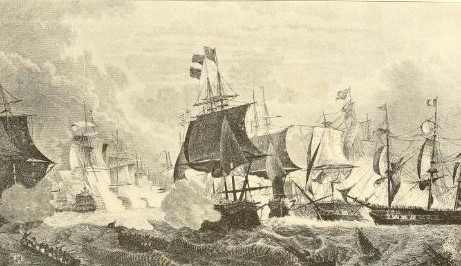 The Vincejo was a Spanish navy ship (Vencejo) captured in the Mediterranean by the British in 1799.  Refitted at Chatham, Captain John Wesley Wright took command in 1803.  The ship sailed to the west coast of France.  It was reported that the ship had carried some French Royalists to France in the hope of overthrowing Napoleon.  The Vincejo continued to keep an eye on French coastal shipping in the west.  The ship's surgeon, John Lawmont (or Lamont) wrote to Patrick Colquhoun about the incident which took place on 8 May 180 - this extract is from the Naval Chronicle of 1815.  It is a fascinating snippet describing a short battle between the British and French navies.

"We have at length arrived at our place of rest, after a fatiguing march of 800 miles.  Illness, which I was seized with soon after we came here, prevented me from writing before this:  I am now quite recovered.  Captain Wright was separated from us at Vannes, and the officers were separated from the men at Verneuil, and conveyed to Paris, where we were first taken to the Abbey prison, and when night set in, we were taken to the Temple, and remained there seven weeks, three of which in solitary confinement.
As perhaps you have not heard the particulars of our being taken, I will give you a short account.  During our long cruise in Quiberon Bay, we were continually engaged with the numerous gun-boats that passed from one port to another with convoy; but having no pilot, and they keeping close in shore, we were unable to do any thing decisive; we, however took two unarmed vessels, one a schooner, laden with flour, the other a national lugger, with 2000 oars for the gun-boats; this last, from our want of men, we were obliged to destroy; the other arrived safe in England.  The day before we were taken, we drove a sloop and a lugger ashore near St. Geldas.  On the morning, at daylight, we discovered a number of vessels coming out of the Morbihan, and a corvette of 18 long 18 pounders lay at anchor close in shore.  The Vincejo was at this time becalmed in a strong tide-way, which drifted us close to a rock, which we avoided by dropping our anchor.  When the tide slackened, having taken a poor man from a fishing-boat as a pilot we attempted to take the Teigneuse passage, but from his fears or ignorance he was of no use, and went down below.  We now trusted to chance:  we were in a narrow and intricate passage, without an air of wind; numerous gun-boats coming rapidly up with us.  Our men, who had been up all night, and who had laboured three hours at the oars in a sultry morning, were quite exhausted, and finding escape impossible, the captain ordered the ship's broadside to be swept-to, and an engagement was kept up against such fearful odds for more than two hours, when our firing almost wholly ceased, three of the guns being dismounted, and the rest incumbered with lumber from the falling of the booms, their supporters having been shot away; the men failing fast, the foremost nearly shot away, and the vessel nearly sinking, Captain Wright was forced to hail that he had struck, just in time to save the lives of the few that could keep the deck, as the gun-boats were rowing up alongside with numerous troops to board.  He himself was wounded in the thigh early in the action, by a grape-shot, but never left the deck.  We lament his separation from us as we would the absence of our dearest friend:  his manners are those of a perfect gentleman, his abilities of the first class, and his bravery only equalled by his generosity and humanity.  In his department to his inferiors, he appears in the most amiable point of view, it being that of a kind and most benevolent father.  Indeed, I have not words to express my admiration of his character.
I have only time to add, without the particulars of the vessels, that the enemy's force was 17 vessels, 36 heavy guns, and from 1140 to 1490 men.
The Vincejo, from having been ashore before this was so leaky as to require pumping almost continually."
John Lawmont

Some of the prisoners from the Vincejo were taken to the Temple prison in Paris.  Notorious,  it was the place of imprisonment of the French Royal Family before execution and had a grim reputation.  Originally it was built as a monastery and fortress by the Knights Templar in the twelfth century.  The buildings were demolished in 1811.  However this was not Captain Wright's first visit to the Tower of the Temple.  In April 1796 he and Sir Sidney Smith for whom he acted as clerk were captured by the French and imprisoned there on charges of spying.  The pair made a daring escape in May 1798.  He was involved in many of Smith's adventures.  Full details of the life and adventures and death of Captain John Wesley Wright can be found in the Naval Chronicle for 1815.

Captain Wright demanded to be treated as a prisoner of war, but the French authorities were determined to charge him with being involved in the landing of royalist agents in France.  Wright refused, despite constant interrogation, to admit any connection with the affair.  Eventually it was reported that he had been found dead in his prison cell.  He had been found lying in bed with his throat cut - almost to the bone.  It was reported that there was no blood on the sheet that covered him up to his neck and that a razor had been found in his hand.  There were also several reports of bloody footprints on his cell floor.  The French tried to say that he had taken his own life.  The British authorities blamed Napoleon for ordering the death of such a valiant officer.  Sir Sidney Smith later went to Paris and erected a memorial to the brave Captain.

Most of the other prisoners taken with Wright were sent to other prisons around France.  A few escaped and managed to return to Britain. Among the prisoners were two thirteen year old boys, Wright's nephew midshipman John Wright (who had started his naval career aged just 7) and William Lort Mansel, the eldest son of the Bishop of Bristol.  Mansel escaped in the winter of 1808 but his health suffered as a result of the conditions he endured finding his way home, and he died not long afterwards.  Lieutenant James Wallis managed to escape from his French prison Verdun in 1813 and was promoted to the rank of Commander.

What about Dr Lawmont (or Lamont) of Greenock?
As Captain Wright was injured, he attended to him in prison.  Later the doctor was moved to another prison elsewhere in France.
In the book "English Prisoners in France:  containing observations on their manners and habits" by the Rev R B Wolfe (Hatchard & Son, London 1830) is written - "Dr Lawmont, the surgeon of the ship commanded by the unfortunate Captain Wright, and who afterwards practised as physician at Glasgow, obtained permission, about two years after my removal to Givet, to go and reside at that depot, in the exercise of his profession.  He was making the journey on foot, when a party of gendarmes, who were conducting some felons, overtook him; and, in spite of his passport, which he produced, he was strung to them by the hand and marched to the next brigade."  It would appear that Lawmont did eventually get to Givet as Wolfe later writes that the surgeon, Mr Lawmont "ordered wine for some of the patients in his charge at the hospital in the prison".

In "Narrative of a Captivity and Adventures in France and Flanders between the years 1803 and 1809" by Captain Edward Boys, RN (Richard Long, London 1812) mention his friend Lawmont, a surgeon in the navy at Givet."

Finally, the Greenock link - there is an entry for him as a surgeon in Greenock in Hutcheson's Directory for Greenock of 1820.
Who would have thought that a short obituary could contain such an amazing story.
Posted by The Greenockian at 07:33