This great mural brightens up the Westburn underpass in Greenock. 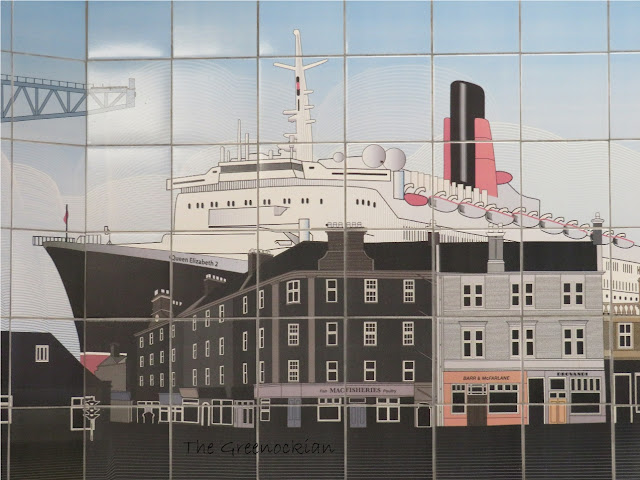 The underpass is between Westburn Street and the Oak Mall in Greenock. 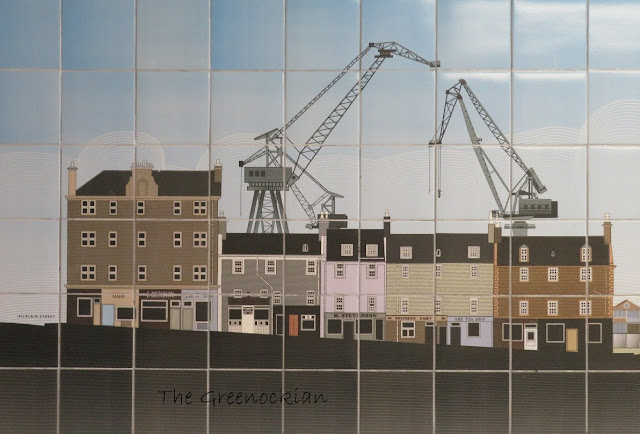 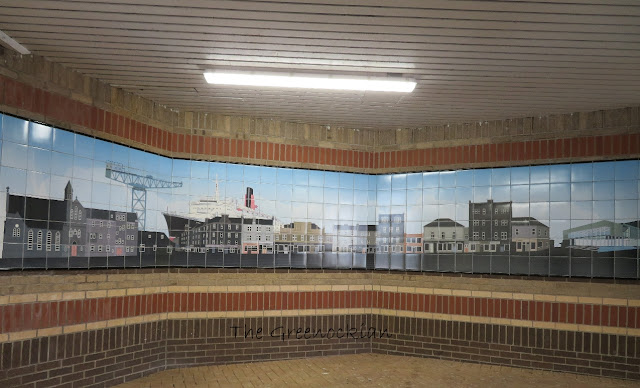 Made of painted tiles, the mural shows some of the buildings that existed before the Oak Mall was built. 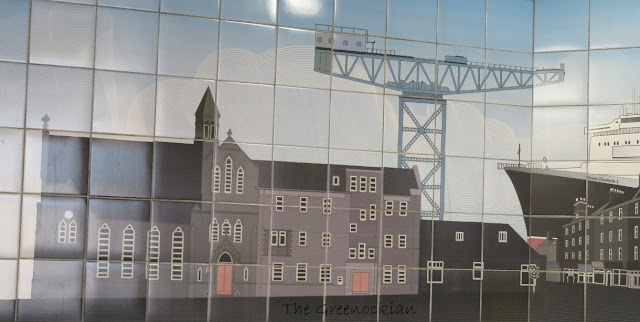 6274 Public Art were responsible for the mural, replacing a previous one which had been damaged. 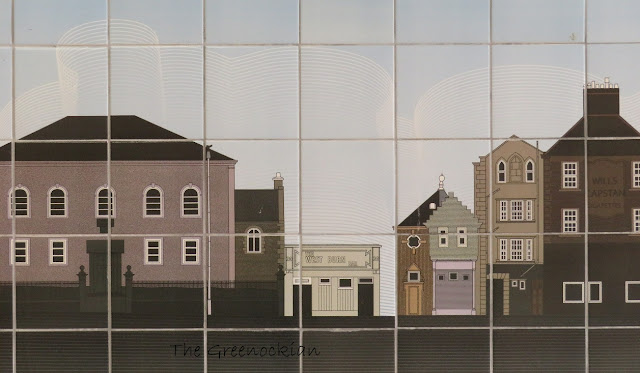 Joining with Monday Murals.
Posted by The Greenockian at 09:33 7 comments:

The Saloon of Greenock Town Hall is used for a variety of purposes.  It is beautifully decorated. 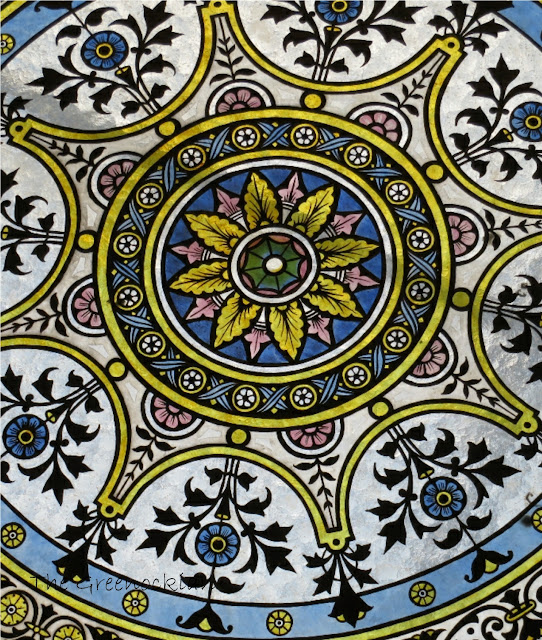 There are beautiful glass inserts in the ceiling.  The colours and details are amazing. 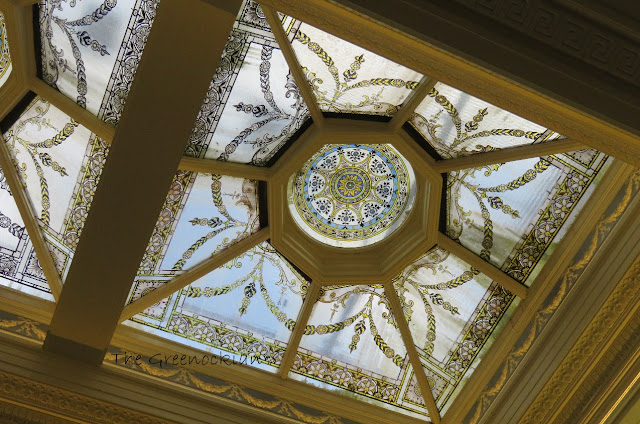 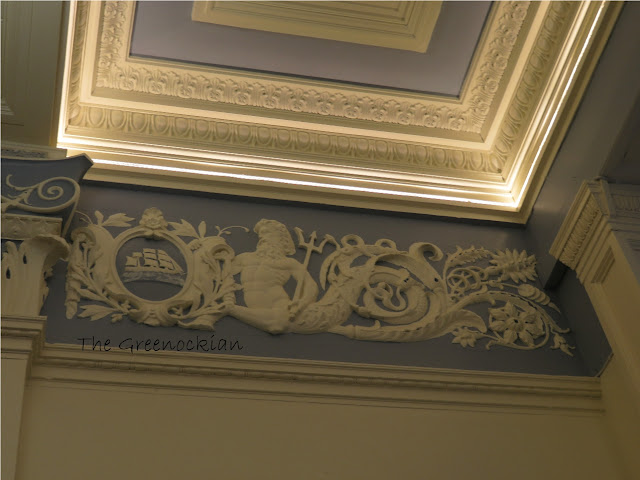 There's a fantastic blue and white plaster frieze around the top of the walls. 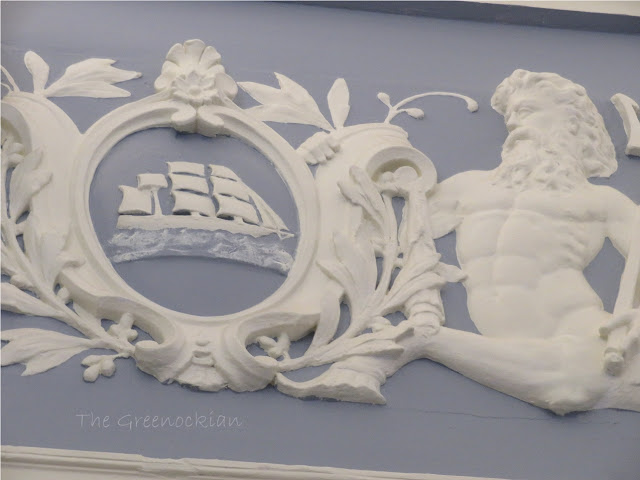 Some of the windows are painted with wonderful allegorical figures - just look at the details. 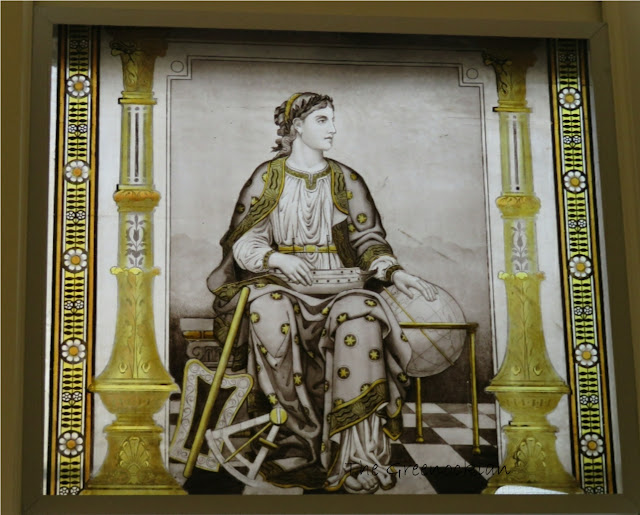 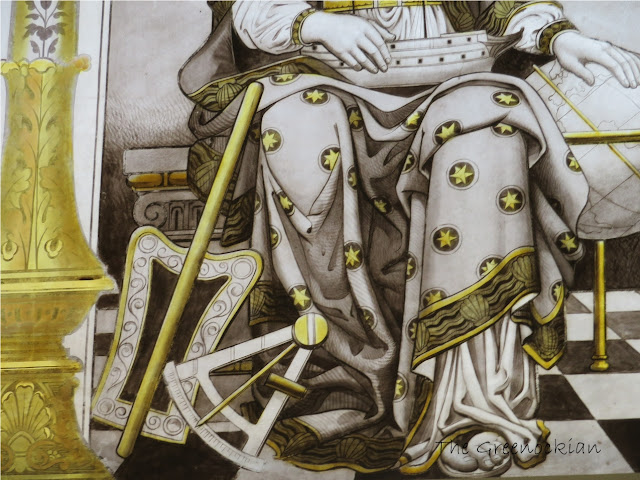 The plasterwork ceiling is lovely. 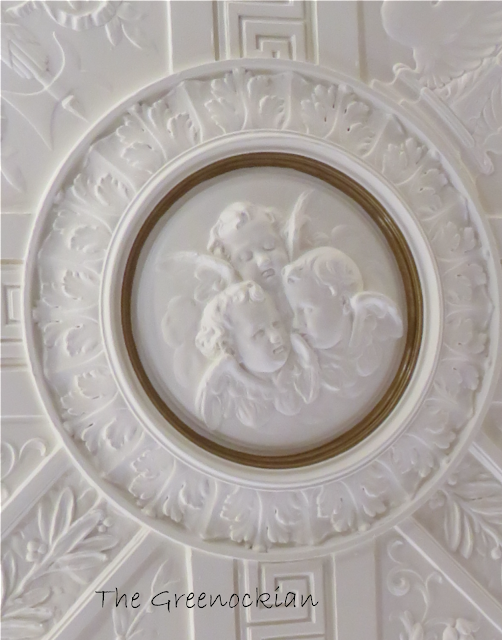 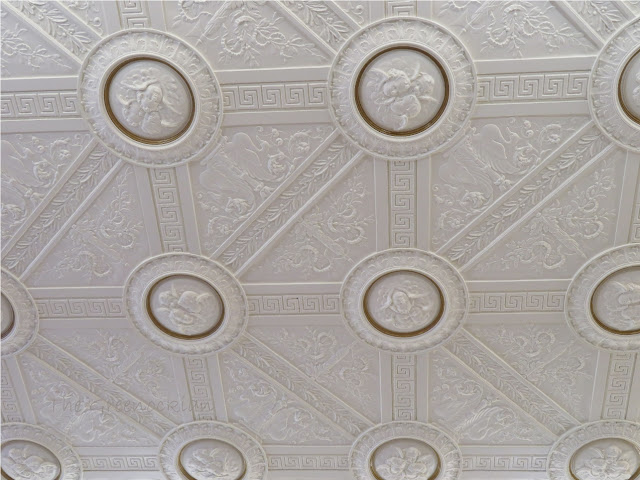 There is so much to see in just that one room.

This wonderful sculpture was on show at the Beacon Arts Centre in Greenock at the weekend.  It depicts violinist Henri Temianka (1906 - 1992) by sculptor Miriam Baker. 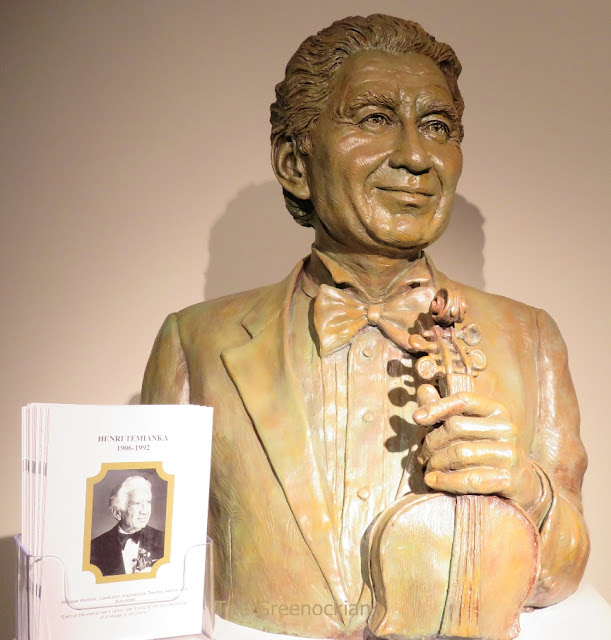 It was unveiled in Greenock last year on the 110th anniversary of his birth here in Rue End Street, Greenock to Polish immigrants.  They were part of the small Jewish community in the town.  Shortly afterwards the family moved to Rotterdam. 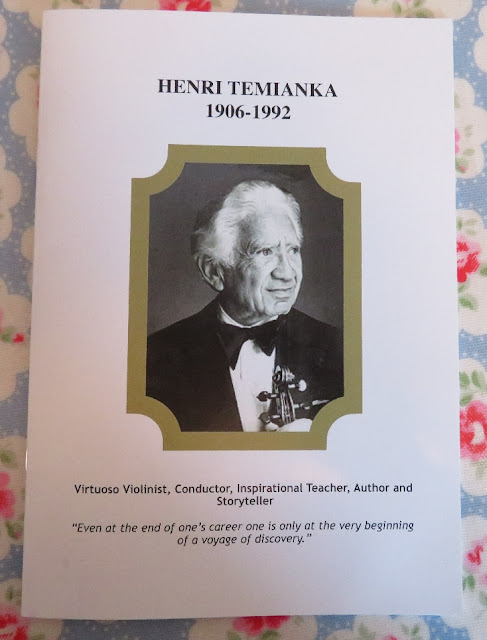 Temianka eventually moved to America where he achieved fame with the Paganini Quartet and many other notable orchestras.  Viki McDonnel of Greenock has done much research into the Jewish community in this area and she is responsible for the wonderful little booklet which you can see in the photograph.  She had been in touch with Henri's son Daniel in California in respect of her research into Greenock's Jewish community 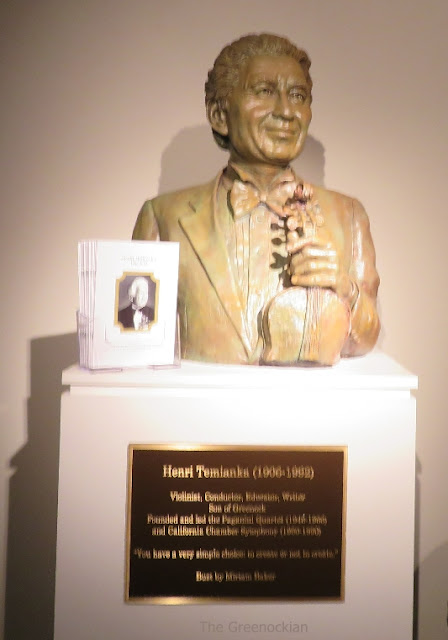 A very interesting and unusual piece of Greenock's history and heritage.
Posted by The Greenockian at 13:38 No comments:

There's a wonderful new venue for local history and heritage resources now in Greenock - its the Inverclyde Heritage Hub. 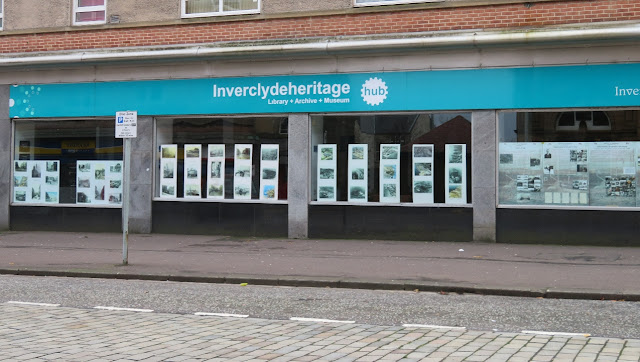 Situated on Cathcart Street (across from the James Watt pub), it is really handy for locals as well as those coming from further afield.  It is just down the road from Greenock's Central Station. 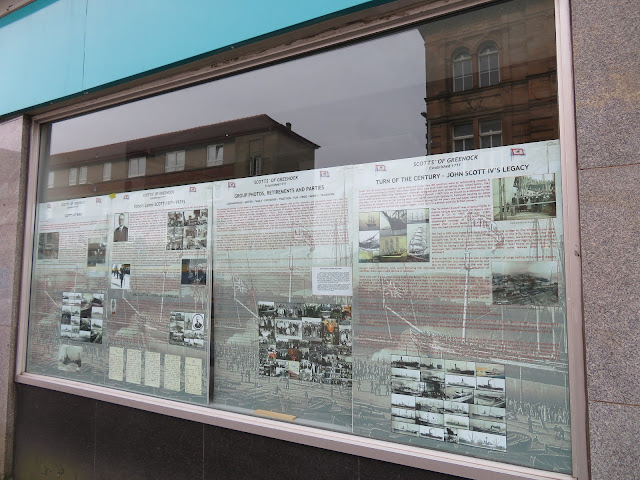 It is a great venue - light and airy with lots of room for books relating to local history, but there are also several wonderful displays, video presentations and collections of old photographs.  Even from the outside there's lots to look at!  The staff are very welcoming and helpful and there are lots of places to sit and read or take notes.  Personally, much as I loved the Watt Library, this is a definite improvement as far as facilities are concerned. 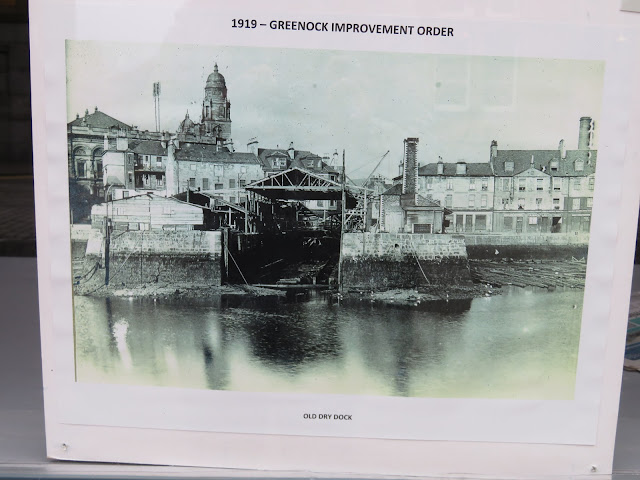 As I may have mentioned before, the local museum - McLean Museum and Art Gallery and the Watt Library which was the place to go for local history information - are both closed until late next year.
Posted by The Greenockian at 13:06 4 comments: