Where did John Galt get his idea for the story Buried Alive?  Well, just a few years before, in 1818 the Glasgow anatomist Dr Andrew Ure had conducted some galvanic experiments on the body of executed murderer Matthew Clydesdale.

Andrew Ure (1778-1857) had been an army surgeon and became Professor of Natural Philosophy at Glasgow's Andersonian Institution.  He had an interest in all aspects of science - chemistry, mechanics, astronomy and was a regular contributor to the Philosophical Magazine owned and edited by Galt's father-in-law, Alexander Tilloch.

In November 1818, Matthew Clydesdale was tried for murder in Glasgow and sentenced to hanging after which his body to be handed over to the anatomists.  The hanging took place in public in front of the Glasgow High Court building and a large crowd attended the event.  The body was then taken up to Glasgow University where the experiments was to be carried out again in front of a large crowd.

Dr Ure reported on the event as follows - 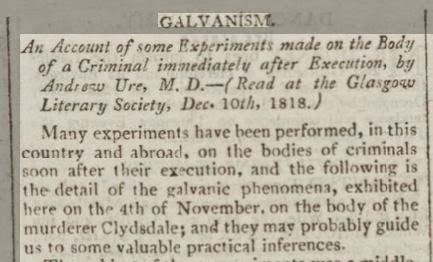 Describing one of the experiments he says - "The pointed rod connected with one end of the battery was not placed in contact with the spinal marrow, while the other rod was applied to the sciatic nerve.  Every muscle of the body was immediately agitated with convulsive movements, resembling a violent shuddering from cold.  The left side was most powerfully convulsed at each renewal of the electric contact.  On moving the second rod from the hip to the heel, the knee being previously bent, the leg was thrown out with such violence, as nearly to overturn one of the assistants, who in vain attempted to prevent its extension."

More experiments followed including - "The supra-orbital nerve was laid bare in the forehead, as it issues through the supra-ciliary foramen, in the eyebrow: the one conducting rod being applied to it, and the other to the heel, most extraordinary grimaces were exhibited every time that the electric discharges were made, … every muscle in his countenance was simultaneously thrown into fearful action; rage, horror, despair, anguish, and ghastly smiles, united their hideous expressions in the murderer's face, surpassing far the wildest representations of a Fuseli or a Kean.  At this period several of the spectators were forced to leave the apartment from terror or sickness, and one gentleman fainted."  (I'm not surprised!)

Another event reported in many newspapers in 1818 was the report of Baron Hornstein who was said to have been buried alive in the family mausoleum.

Truth or fiction?
Posted by The Greenockian at 14:53 No comments:

I am pleased to say that the title of the post does not in any way refer to the death or burial of John Galt here in the Inverkip Street Cemetery in Greenock, but rather to a curious short story written by Galt in 1821. 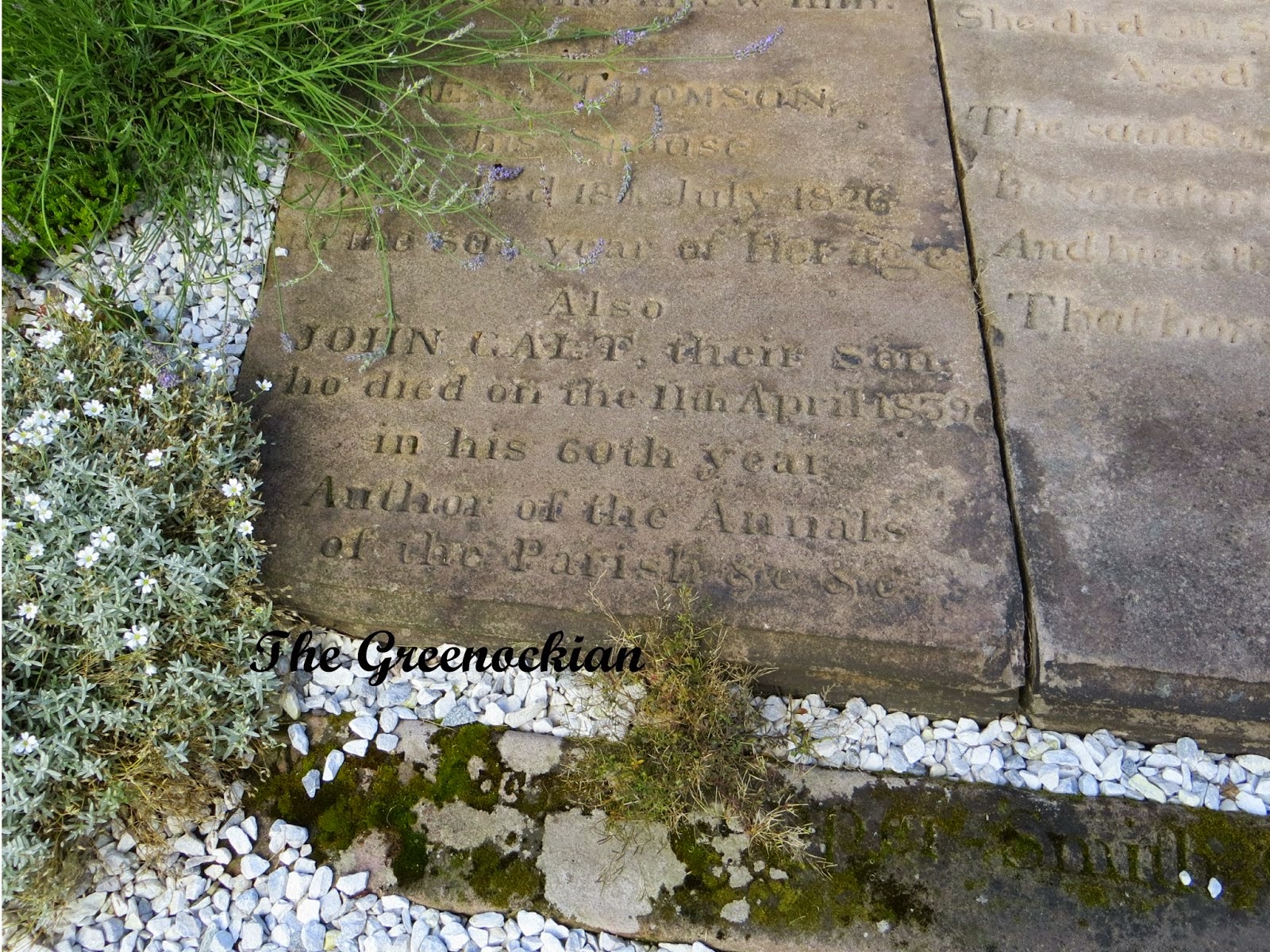 Buried Alive was first printed in Blackwood's Edinburgh Magazine in 1821 and also included with others in Galt's The Steam Boat, a collection of stories related on a steamboat trip from Glasgow to Greenock and Helensburgh.  The story is narrated by "a young man with a white face and a slender habit of body" and is a strange tale of death and burial.

The pale young man recalls "… I heard the sound of weeping at my pillow - and the voice of the nurse say, "He is dead."  I cannot describe what I felt at these words.  I exerted my utmost power of volition to stir myself, but I could not move even an eyelid.  After a short pause my friend drew near; and, sobbing and convulsed with grief, drew his hand over my face, and closed my eyes.  The word was then darkened, but I could still hear, and feel, and suffer."

The narrator then goes on to recall his misuse by the undertakers who "treated what they believed a corpse, with the most appalling ribaldry."  Next comes the horrific tale of funeral and burial.  The earth is thrown on his coffin - he can hear the sound, but can do nothing about it.  He thinks about how his flesh will rot and decay, buried in the earth …
"In the contemplation of this hideous thought, I heard a low and undersound in the earth over me, and I fancied that the worms and the reptiles of death were coming - that the mole and the rat of the grave would soon be upon me.  The sound continued to grow louder and nearer."  I love this passage!

But the tale is not finished, John Galt has a couple of surprises for the reader.  Suddenly the buried man feels hand about his neck and he is dragged from his coffin, his body is thrown into a carriage.  He has been taken by the body-snatchers or resurrection men!  He is carried into a room, stripped of his shroud and placed on a table.  He is in an anatomy theatre where galvanic experiments are to be made on his body - "The first shock vibrated through all my nerves; they rung and jangled like the strings of a harp."  And then …..?!

Well you can read the remainder of the story online here. 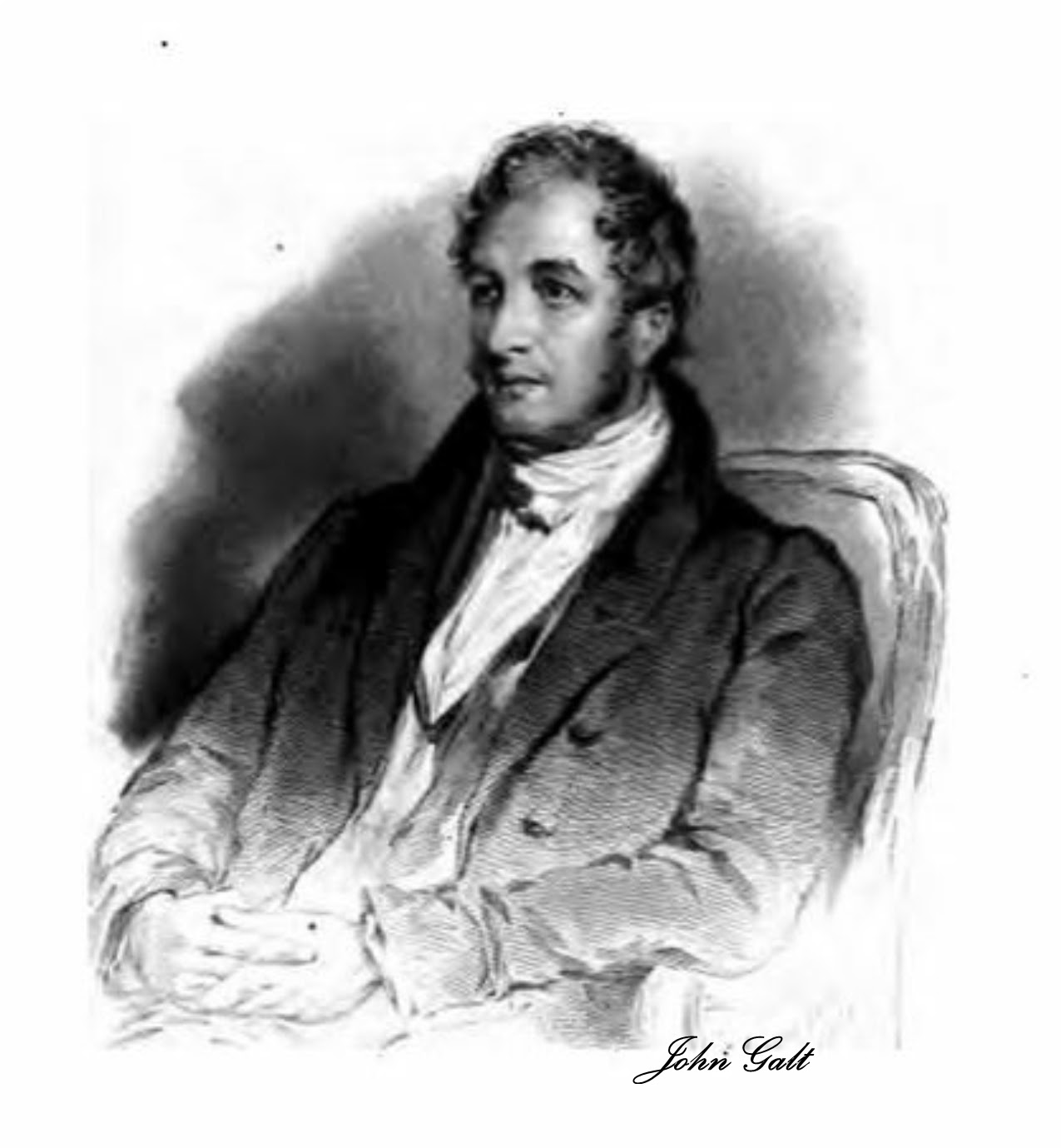 John Galt - brilliant author and teller of tales!
Posted by The Greenockian at 12:14 No comments:

On the River Clyde - Fort Victoria 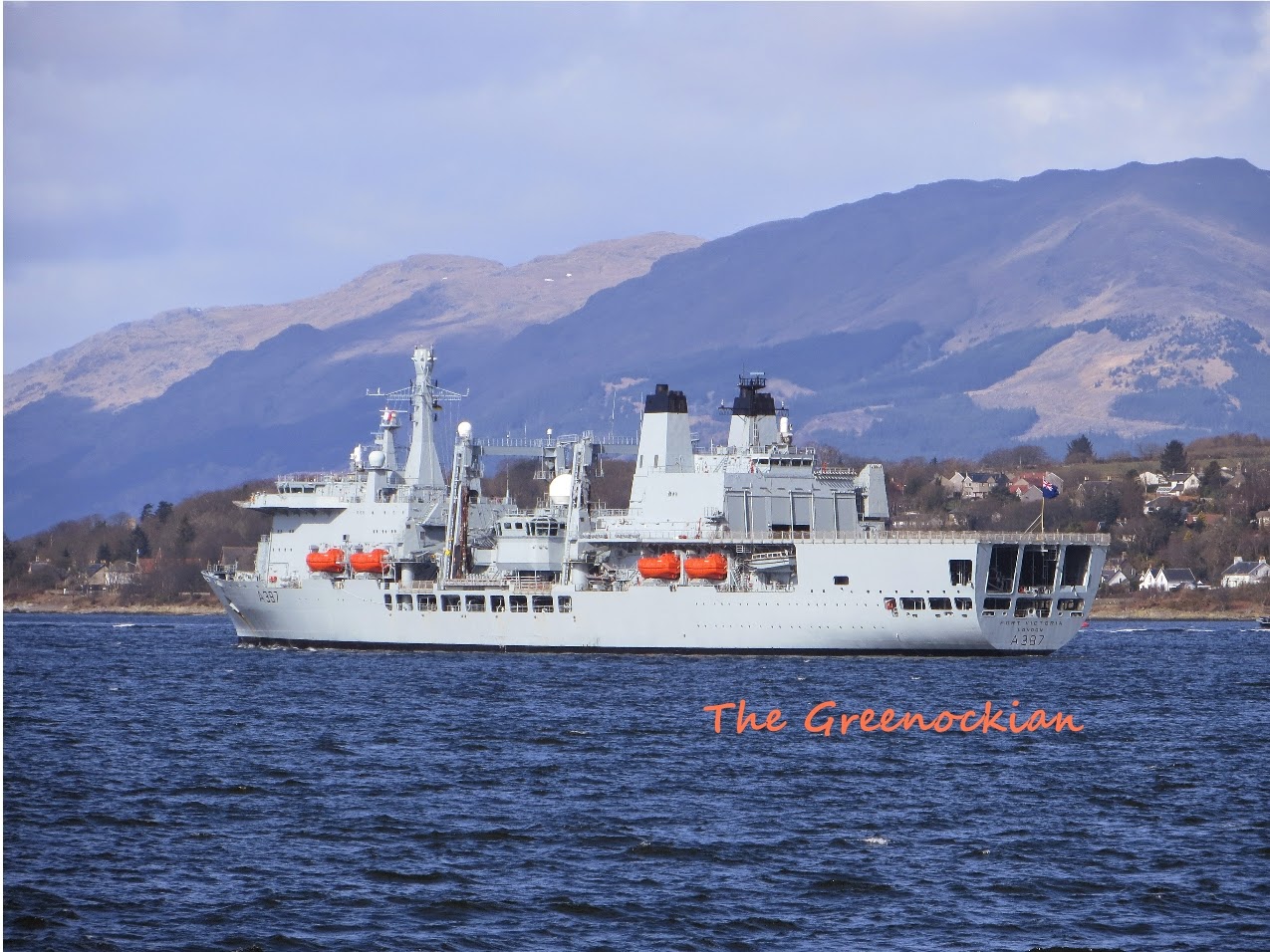 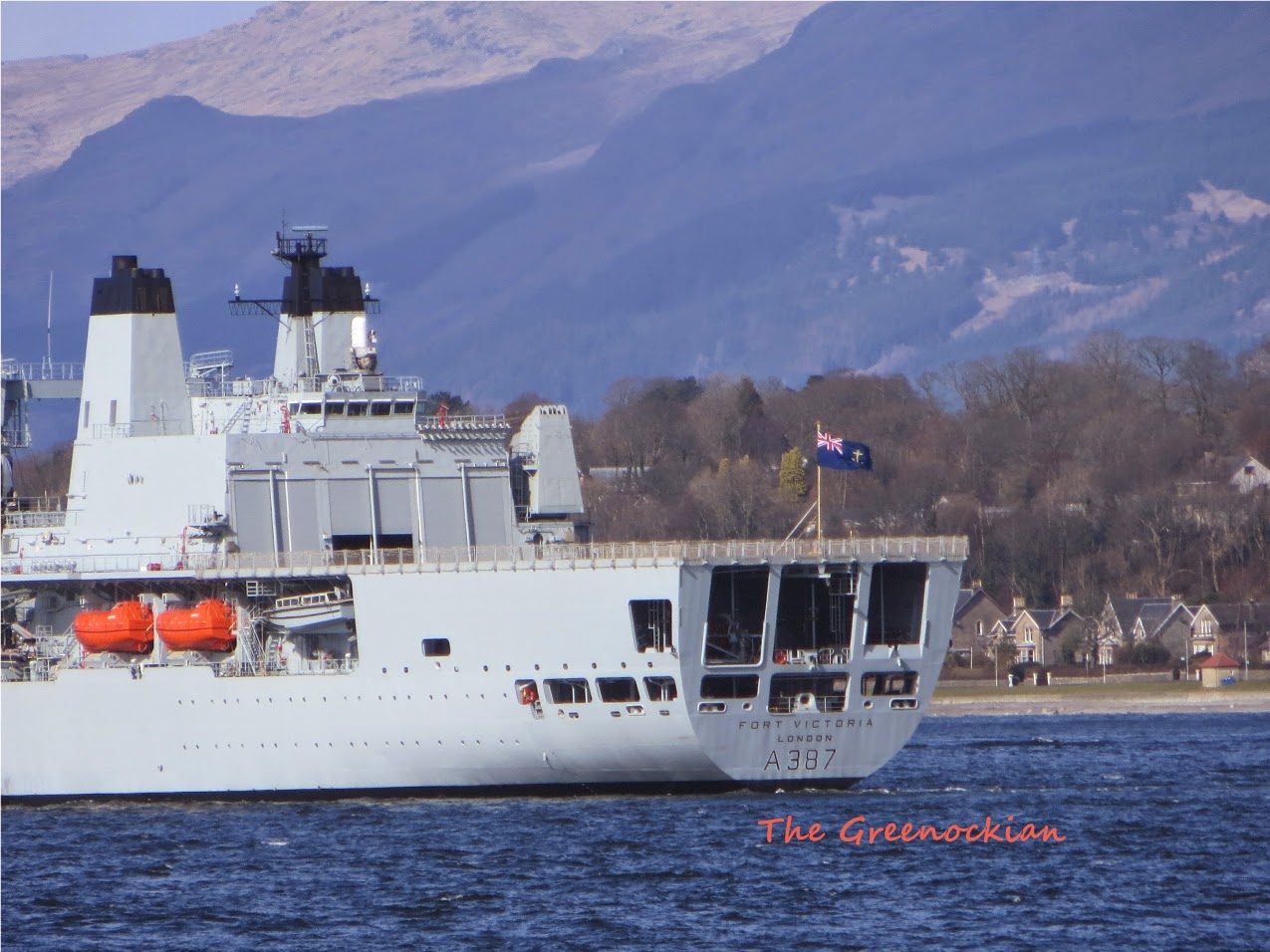 Store ship and tanker for the Royal Navy - you can read all about her at this great site.
Posted by The Greenockian at 19:36 No comments: 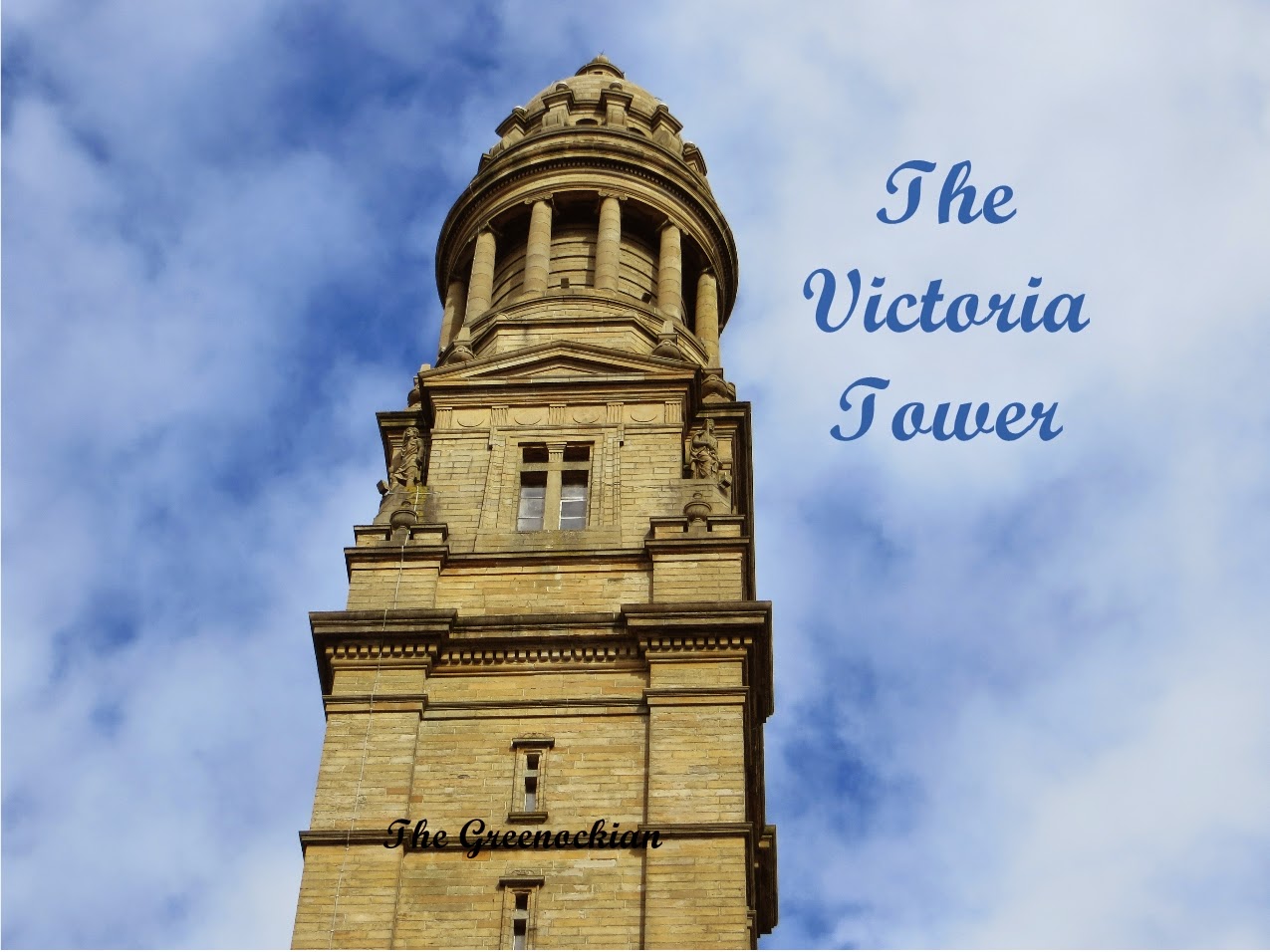 John Galt and the story of Bryce Gilliland

I have written about John Galt (1779-1839) a few times on this blog.  Not only do I admire him as someone who has Greenock connections, but I enjoy reading his work for enjoyment, and also for the little snippets of local information that abound in his work.  Recently I re-read Galt's autobiography and came across a story that got me interested and I decided to do some further research.  It is the story of Bryce Gilliland.

In his Autobiography John Galt writes about his unhealthy childhood -
"This infirm state led me not only to avoid the hearty exercises of other boys, but to seek indoor amusement that was, had it been observed, remarkable in one so young.  I remember that there were a number of old women who lived in the closs behind my grandmother's house, and in their society to hear their tales and legends I was a frequent visitor.  One of them was the mother of Lieutenant Gueliland, who was flag-officer to Lord Nelson, and killed at the battle of Trafalgar.  He was older than me, and I do not recollect him very well, but he was a brave and intelligent officer; his townsmen have erected a monument to his memory in the church, and I have the gratification to record that I obtained for his only sister a munificent donation from the Patriotic Fund formed during the war at Lloyd's." 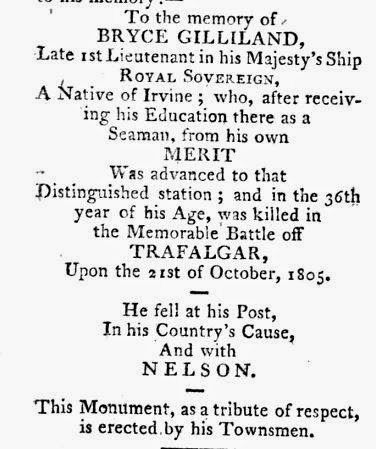 It is likely that he went to sea of his own accord, as many Irvine men did and was later press-ganged into service with the Royal Navy.  His naval career seemed to have started as an Able Seaman on HMS Diana in 1794 and proceeded with service on many navy ships such as HMS Standard.  He was Quartermaster on HMS Northumberland and rose to the rank of Midshipman and Master's Mate.  In 1801 he served aboard Nelson's flagship HMS Foudroyant.  He saw service in the Egyptian Campaign becoming a Lieutenant and serving on HMS Druid. (Information from a fabulous site "Trafalgar Ancestors" at the National Archive.) 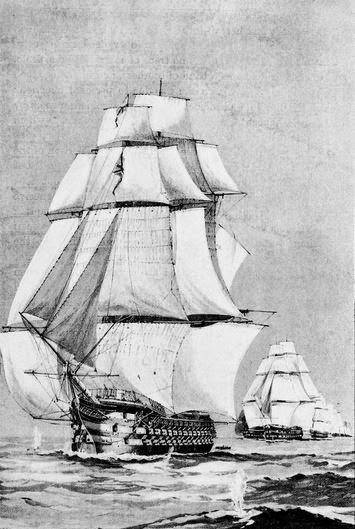 Ironically, Between 1801 and 1802 Guilliland was part of the impress service based at the Strong Man pub in Lower East Smithfield recruiting for the Royal Navy ship HMS Determinee.  Thereafter he was transferred to HMS Dreadnaught where he came to the attention of Admiral Collingwood.

He must have made a good impression on the Admiral because on 9 October Collingwood wrote to Nelson that he wished to take his Signal Lieutenant, Brice Gilliland with him from the Dreadnaught to the Royal Sovereign.

On 21 October 1805 Bryce Gilliland, aged 36 was killed on board the Royal Sovereign during her heroic struggles in the Battle of Trafalgar.

As John Galt points out, Lloyds did, on 28 July 1803, set up a Patriotic Fund "to assist the many casualties of the Napoleonic Wars".  It is still in existence, working with armed forces charities providing help to those in need. 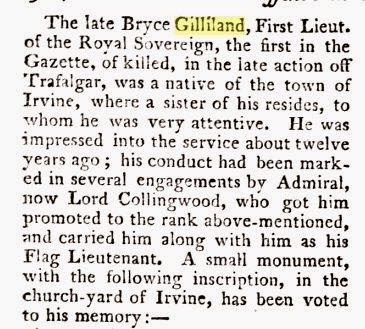 Perhaps John Galt was remembering the old stories he heard told by Bryce Gilliland's mother when he wrote this passage  in his 1821 novel Annals of the Parish.  The passage refers to a young man from the locality, Charles Malcolm and is told by the narrator of the book, the Rev Micah Balwhidder -