One funnel or two?

The Clyde steamer Queen Mary was towed into the James Watt Dock in Greenock last week.  A welcome return thanks to the Friends of TS Queen Mary, a charity formed to safeguard the future of the ship.  (TS - turbine steamer.)

She is not much to look at now, but in her heyday was a majestic passenger steamer taking day trippers from Glasgow "doon the watter" to Clyde resorts such as Dunoon and Rothesay.  These photographs are from an underpass mural in Greenock which I've blogged about before.  She looks quite a bit different. 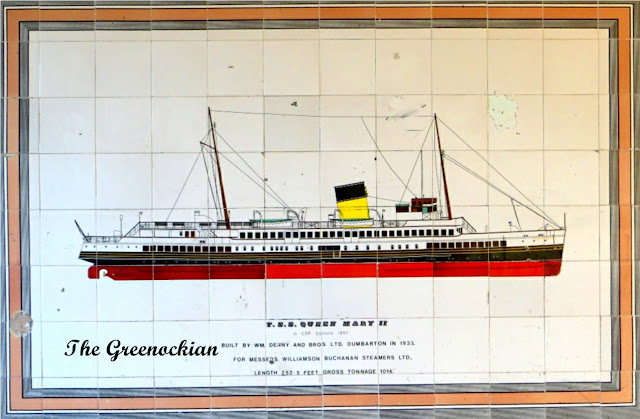 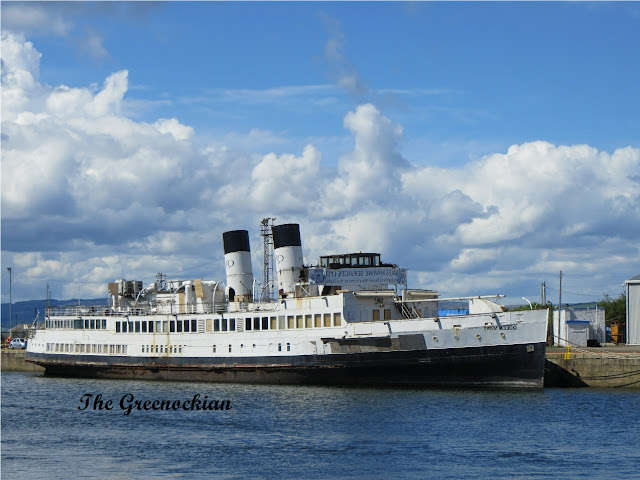 Her appearance has changed somewhat over the years.  When she was built in 1933 at Denny's Shipyard at Dumbarton she had two funnels.  In 1957 she was given a new boiler and one of the funnels removed.  Then in 1987, having finished her days on the Clyde, she was fitted out as a restaurant, all her machinery was removed and another funnel added.  She was berthed at Waterloo Bridge in London until closed in 2009. 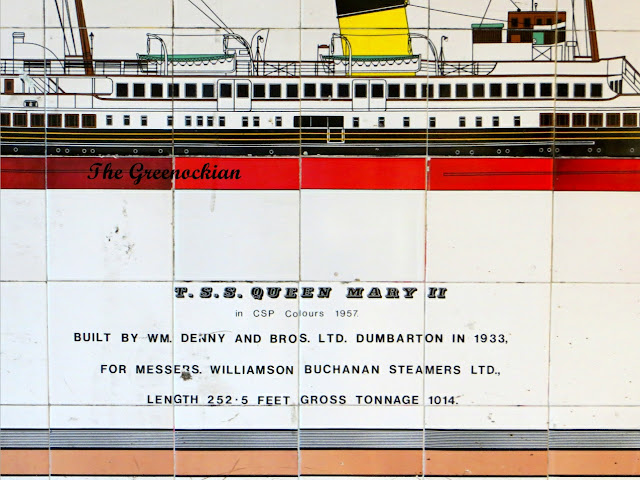 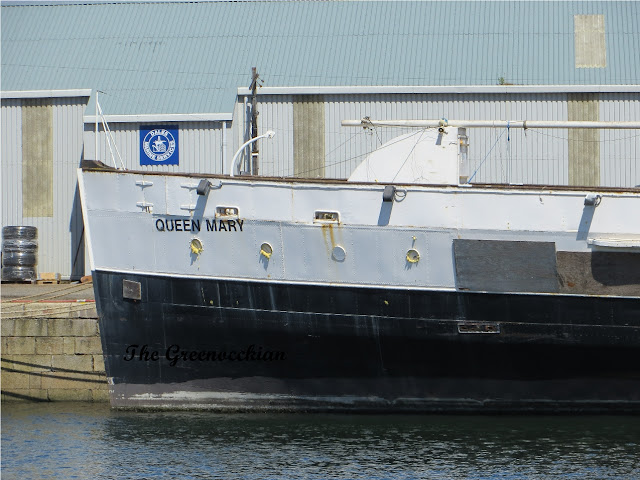 Perhaps when you think of ships called Queen Mary, the Cunard cruise ship springs to mind.  Well, there is a connection.  In 1935 Cunard requested that the steamer's name be changed so that they could name their liner Queen Mary.  The steamer was then named TS Queen Mary II.  In 1976 she got her old name back! 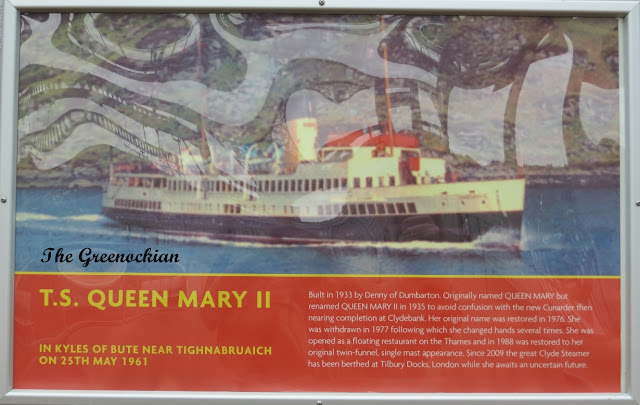 During World War II she was the ferry between Gourock and Dunoon.  The photograph above is of a poster in Gourock Station. 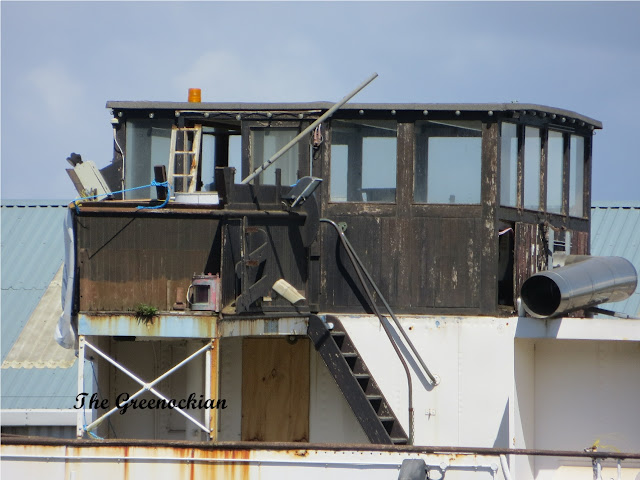 Dales Marine Services now have charge of the Queen Mary and it will be great to see what the future hold for her. 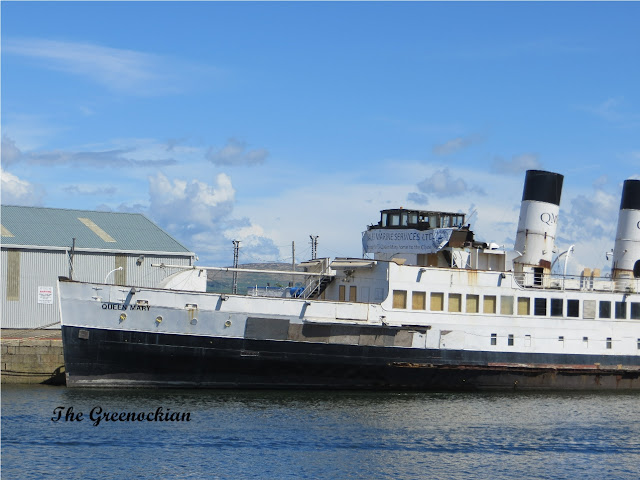 All this is thanks to a group of people, the Friends of TS Queen Mary who have got together to save her.  Check out their site for so much more information about the history of the ship.

I had never really paid much attention to this fountain in the Pierhead Gardens in Gourock, but it really has some lovely features. 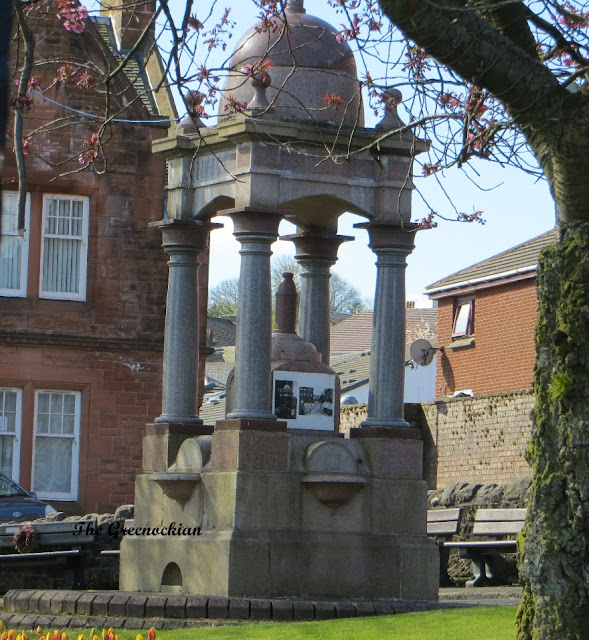 It was donated to the town by Captain Duncan McPherson.  He died in 1910 at Mavisbank in Gourock.  His obituary states that he was marine superintendent of the Gem Line of coastal steamers, was a local councillor and magistrate and was Commodore of the Royal Gourock Yacht Club. 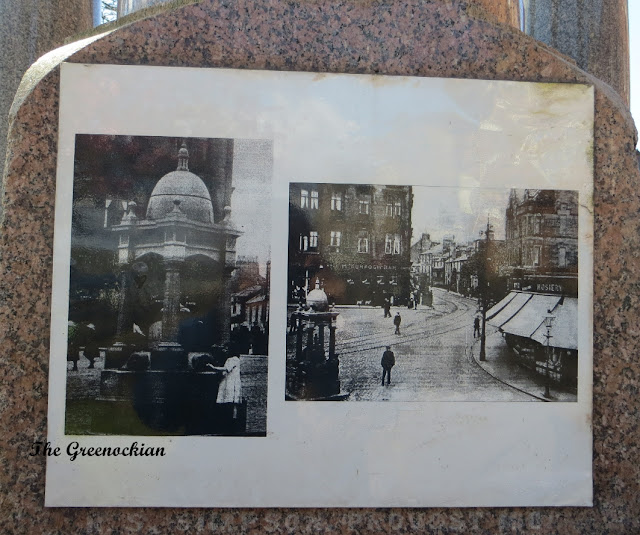 The fountain originally stood in the road at the pierhead - you can see this from these old photographs which are conveniently attached to the fountain.  It was dismantled and removed because of increased traffic.  For many years it lay neglected in a council yard.  It was rediscovered in 2005, refurbished and rebuilt by W H Kirkwood and then placed in its present location in the gardens across from Gourock railway station. 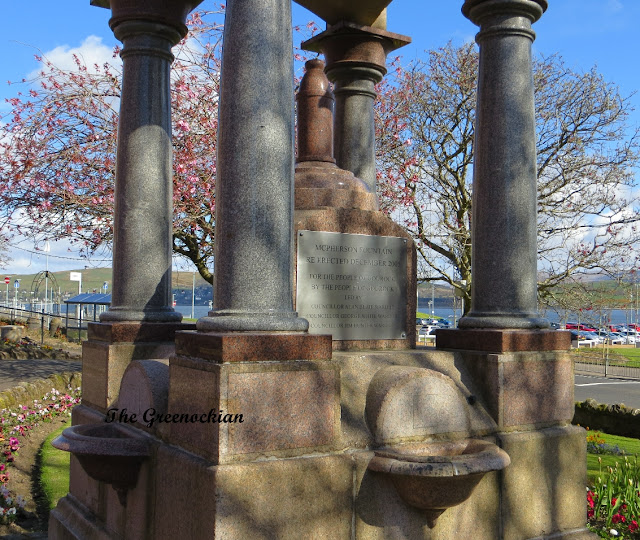 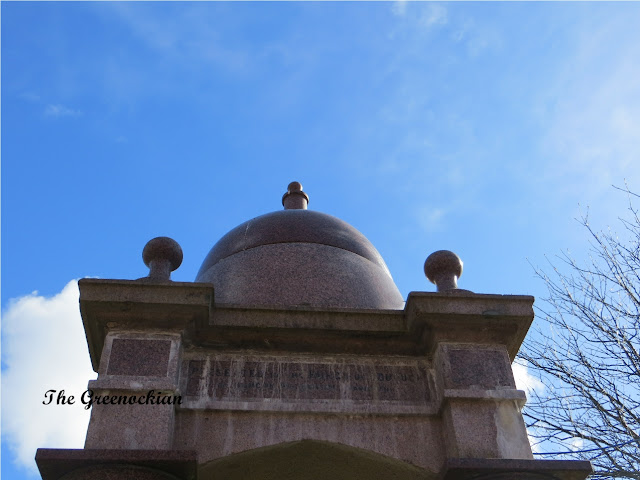 It was only when I was taking photographs that I noticed these lovely sculpted panels of ships which I presume are to commemorate Captain McPherson's association with the sea and yachting. 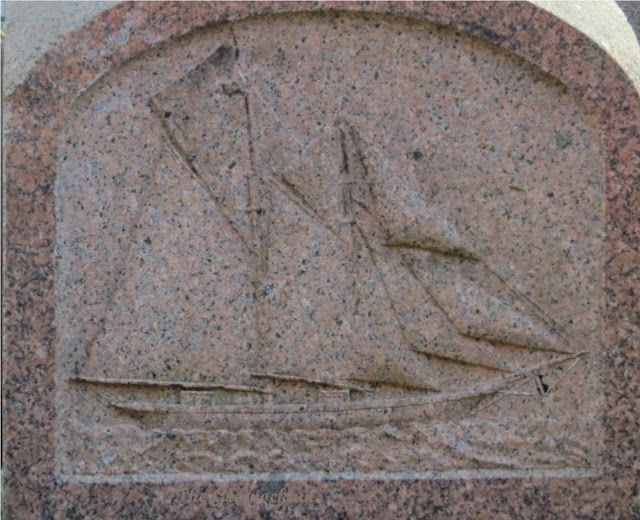 Duncan McPherson also donated a cottage hospital to Gourock.  It opened in 1925 and closed in the 70s.  The building is presently used as a centre for adults with learning difficulties. 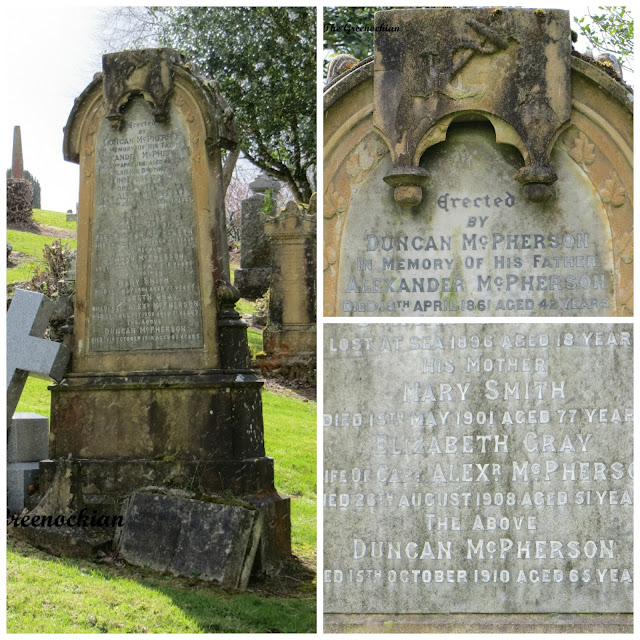 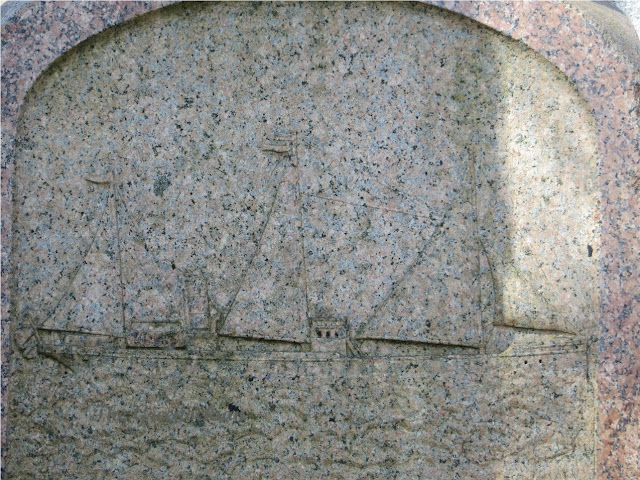 (The Gem Line shipping company was founded in 1852 by William Robertson and the ships were named after precious stones - Ruby, Pearl etc.  More information can be found at the University of Strathclyde Archives.) 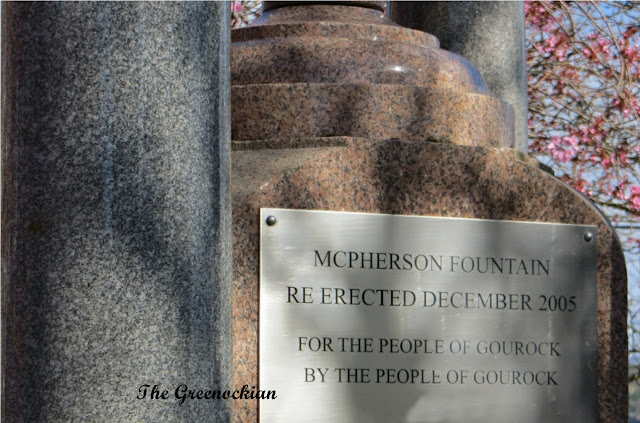 This is the lovely St Andrew's Church in Port Glasgow. 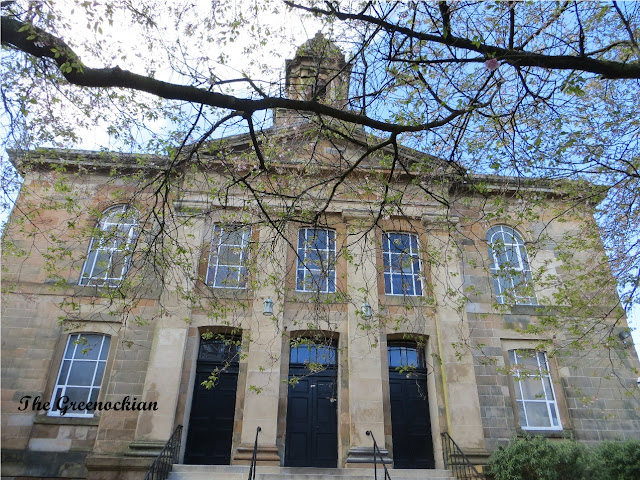 It's a beautifully classical building dating from 1823.  It was refurbished in 1898. 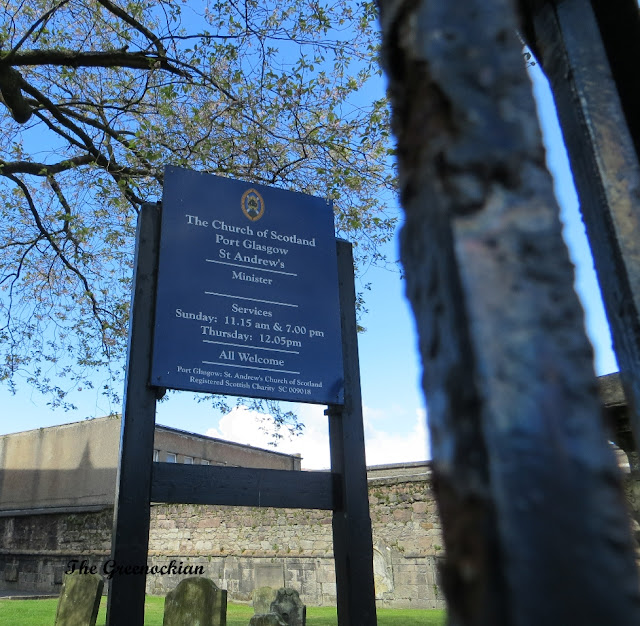 This is the belfry - look at those lovely classical features. 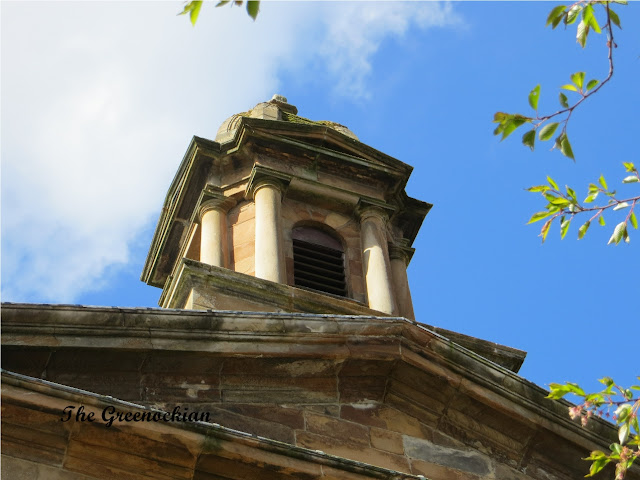 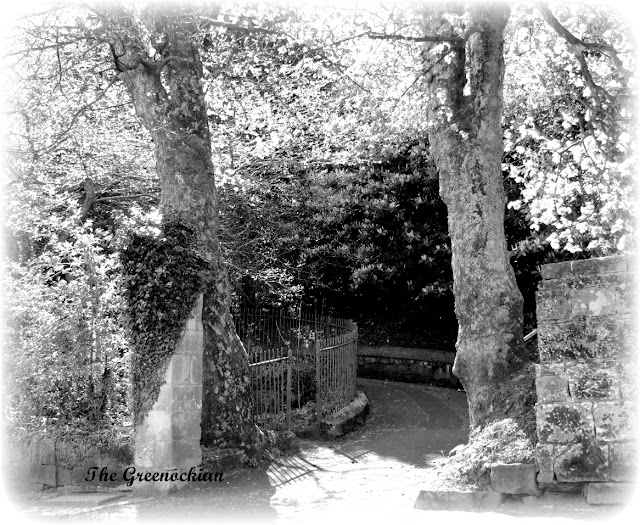 Tried a few different photo effects - like the black and white best - makes it look a bit mysterious. 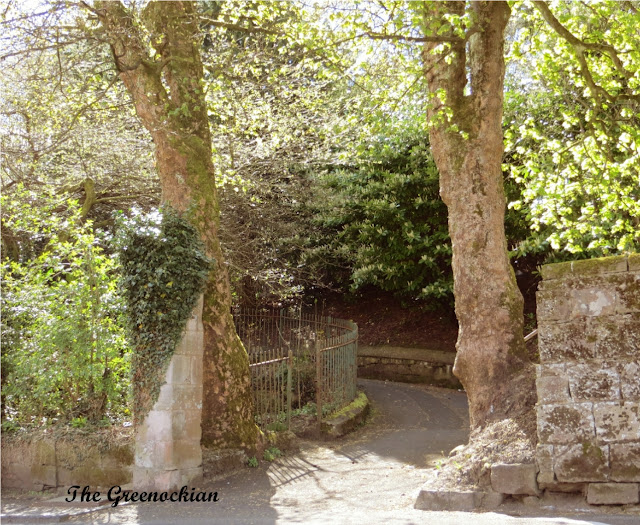