I love these new lamp posts in Gourock.  They look a bit like yacht sails and fit in so well with their location. 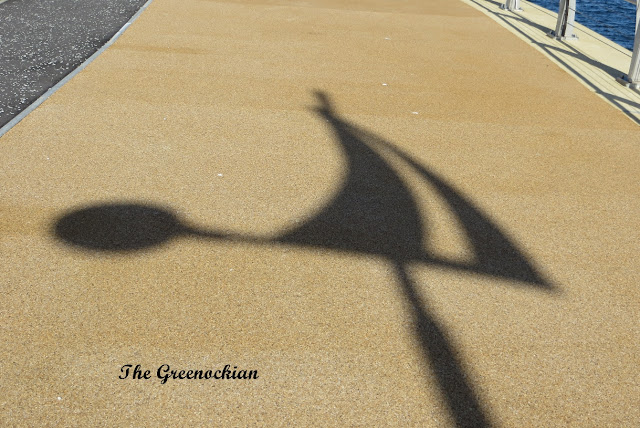 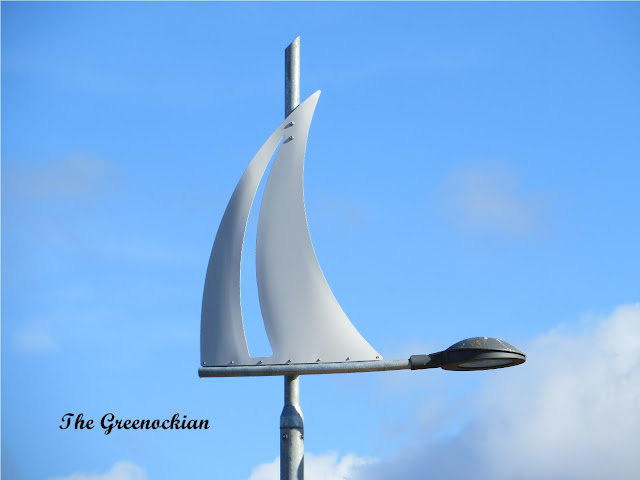 Since the introduction of the new one-way road system in Gourock, a whole portion of what used to be a car park has been transformed into a lovely walkway.  Just look at those views across the River Clyde to the hills of Argyll. 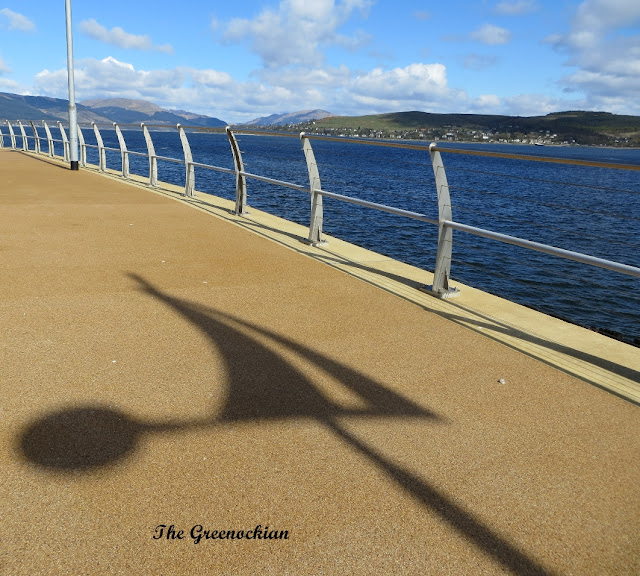 Of course a bit of sunshine helps! 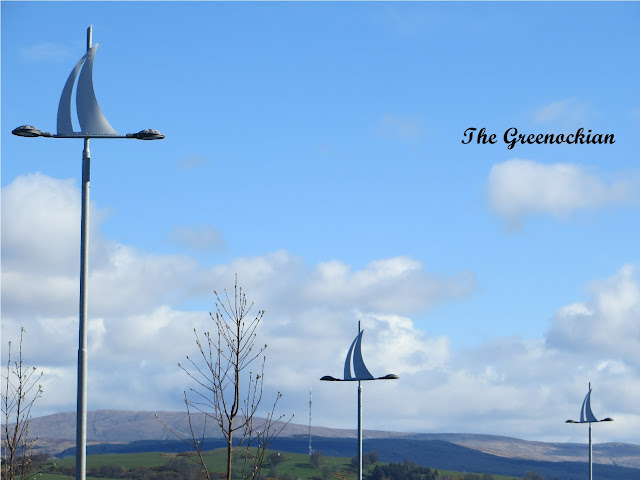 I think here they resemble the wings of a great seabird!
Joining with Shadow Shot Sunday 2.

The tall ship Stavros S Niarchos has been in at the James Watt Dock in Greenock recently. 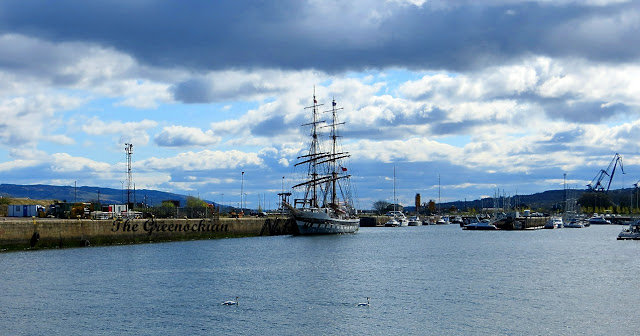 The ship is owned by the Tall Ships Youth Trust and is a two-masted brig. 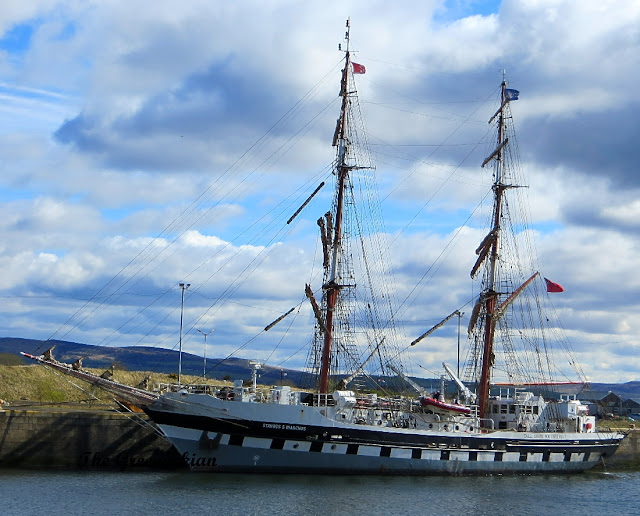 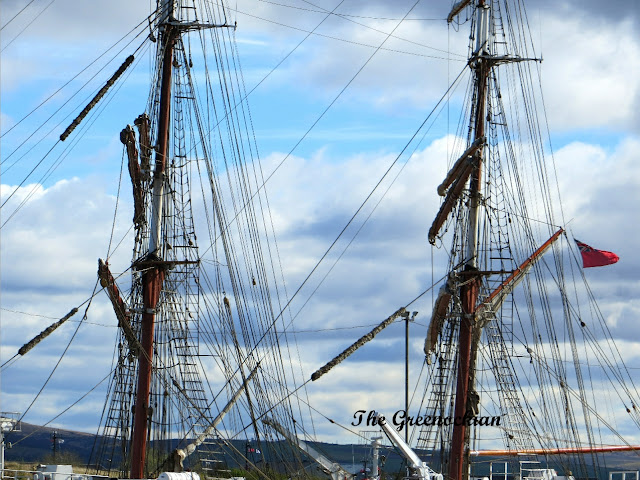 Would love to see her in sail. 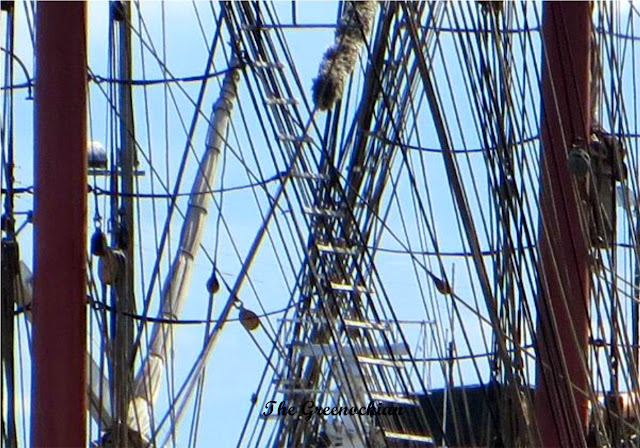 Just seeing this ship docked in Greenock makes me think about how the place must have looked when the Clyde and docks were filled with ships like this.  Must have been amazing!  Oh no, now I've got the theme music from the Onedin Line in my head!
Posted by The Greenockian at 08:30 3 comments:

On the Clyde - sunshine and swans

Love the majesty of swans - they are so beautiful and aloof. 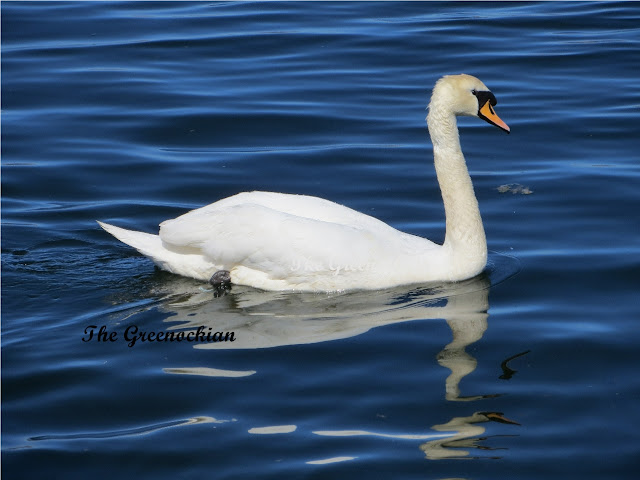 The sun was shining on the River Clyde making everything seem so much more vibrant! 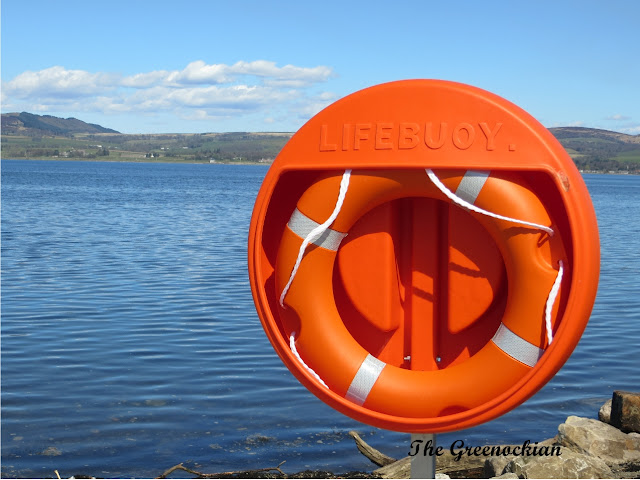 These photographs were taken at Coronation Park in Port Glasgow. 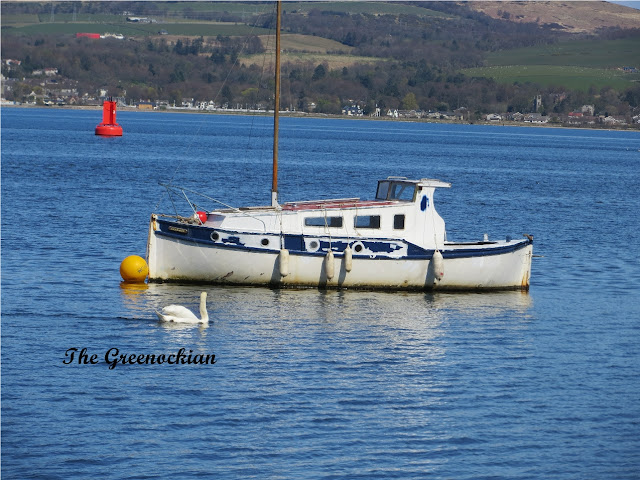 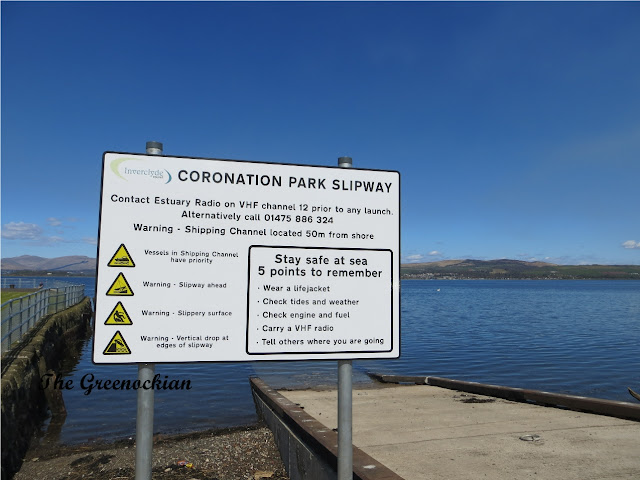 There's a lovely walk along the riverside - especially on a sunny day like this.

From the Clyde to Cape Fear

A recent archaeological find in the Cape Fear River in North Carolina leads right back to Greenock. The remains are of a blockade runner, believed to be the Agnes E Fry which sunk in 1864.  The ship was built by Cairds shipyard in Greenock, originally for the coastal mail service.

Her Captain, Joseph Fry (1826-1873) joined the United States navy as a midshipman in 1841 and worked his way up to the rank of lieutenant.  During the American Civil War he joined the Confederate Navy.  In 1864 he was sent to Scotland to pick up the ship Fox which he renamed Agnes E Fry after his wife Agnes Evaline. 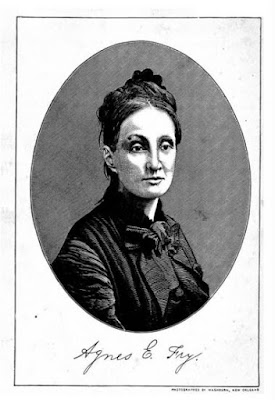 The iron paddle steamer Fox had been built in 1864 by Caird & Company, shipbuilders in their east yard in Greenock.  Here is a report of her launch from the local paper - the Greenock Advertiser. 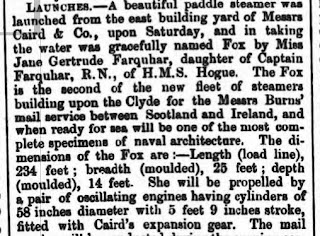 The ship was bought by Crenshaw & Co of Wilmington, North Carolina.  Captain Fry sailed the ship from the Clyde to the Bahamas.  The Agnes E Fry then made three successful runs into Wilmington before being run ashore and sunk in the Cape Fear River near Oak Island in December of 1864. 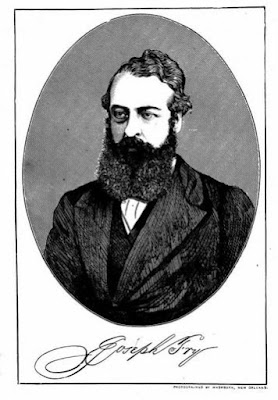 Captain Fry is more usually associated with another Clyde ship,Virginius.  Launched from Aitken & Mansell's yard at Kelvinhaugh, Glasgow in 1864 she also became a blockade runner and survived.  In 1873 Captain Fry took command of the Virginius in Jamaica.  He also took on board "war materials" (arms and munitions) and insurgents heading to Cuba.  On the way they were intercepted by the Spanish gunship Tornado (formerly the famous Pampero, built by J & G Thomson at Govan in Glasgow). 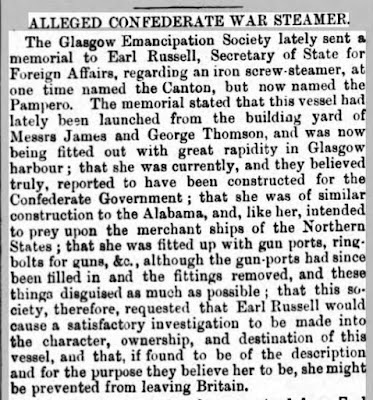 Captain Fry surrendered and the Virginius with all on board were taken to Santigo de Cuba. 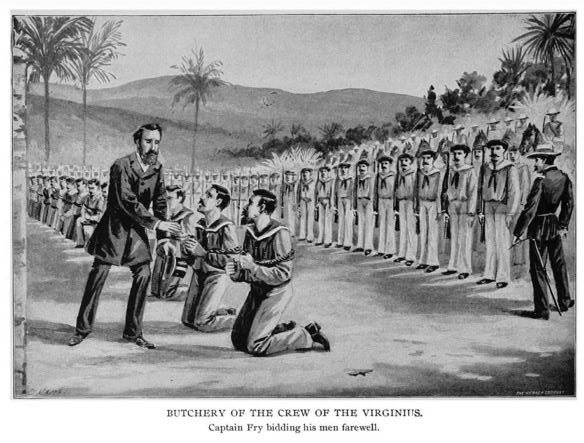 It is a long and complicated story and has been well documented elsewhere - read here.   The upshot was that Captain Fry (who became known as the Cuban Martyr) and 53 others were executed by firing squad.  A British ship, the Niobe under the command of Captain Sir Lambton Loraine steamed into port and Sir Lambton demanded that the executions should cease.  He managed to calm things down, but the incident created a major international outcry. 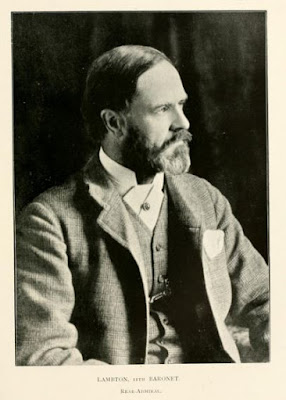 The Virginius was returned to the United States, but by this time she was unseaworthy and sank off Cape Fear.
Anyone interested in Clyde ships used as blockade runners should read "Clydebuilt" by Eric J Graham.  It is full of information about the ships and their adventures.  I've written about it here.
Posted by The Greenockian at 14:30 1 comment:

After a beautiful day of sunshine, the sunset at Gourock last night was amazing.  Love how the old pier is reflected in the river. 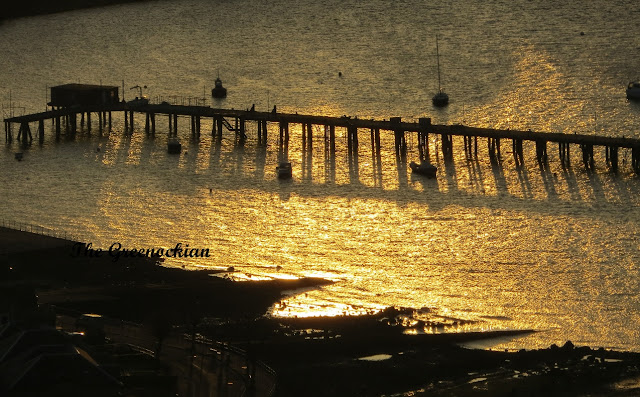 Views were taken from the Lyle Hill in Greenock where the beacon torch had been lit for the Queen's birthday. 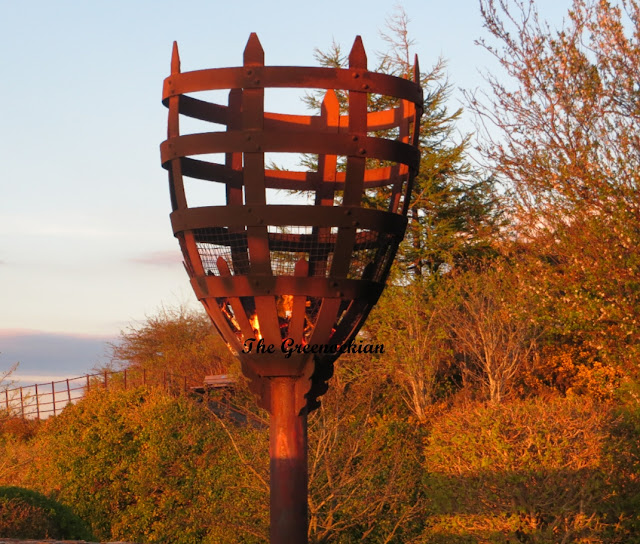