A few words on a grave marker in Greenock Cemetery led me to discover a rather interesting story. 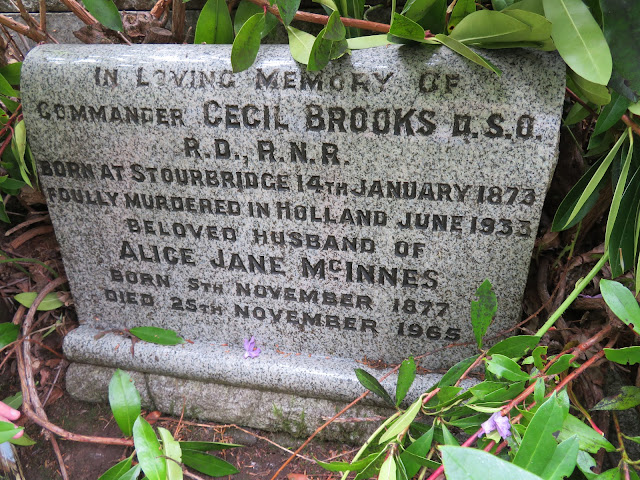 In  June 1933 Commander Cecil Brooks, after a business trip to Rotterdam, booked a passage on the channel steamer Prague from the Hook of Holland to Harwich.  He was seen on board on the evening of 16 June.  When the ship arrived at Harwich his luggage was still in his cabin and his bed had not been slept in.
Cecil Brooks had disappeared!

His wife, Alice Jane McInnes Brooks made extensive inquiries abroad to try and find out what had happened, but returned to their home at Beechcroft Avenue, Golders Green without any explanation of events.

On 17 July 1933 a body washed up on Terschlling Island in Holland, it was believed to be that of Cecil Brooks and was buried on the island (100 miles away from the Hook of Holland).  Eight days later his wife had the body exhumed and returned to London for examination, the body was identified by Dr Hugh Paterson, surgeon with the P & O steamship company.  A post mortem was carried out by Sir BernardSpilsbury and an Inquiry was held.  Mrs Brooks was represented by Henry Flint.

Commander Cecil Brooks had retired from service with the P & O line in February of that year.  He had been at sea for 43 years and had latterly had command of SS Ranchi of the Peninsular & Oriental Steam Navigation Company.  However he had been asked to act as marine adviser to the Egyptian Government in respect of buying ships for their merchant fleet.  It was in connection with this business that he had been in Rotterdam.  Mrs Brooks was convinced that her husband's death had been in connection with this work. One newspaper reported that -

"Brooks himself had hinted that his work was being checkmated by certain circles in central Europe interested in making metal deliveries to Egypt."

The inquest confirmed that Captain Brooks, an experienced mariner and teetotaller, was unlikely to have fallen overboard.  But because of the time the body had been in the water and then hastily buried at Terschlling, it was difficult for the coroner to establish a precise cause of death.  It was noted that there was an indentation at the back of the skull, but this was put down to a previous injury.  After the Coroner's summing up, Mrs Brooks' counsel intimated that she wished to speak as she was convinced that there had been foul play, but this was not allowed and an open verdict recorded.

The body was then conveyed from London to Leith by steamer and then by train here to Greenock for burial in Greenock Cemetery.  Cecil Brooks and Alice Jane McInnes had been married in the Mid Parish Church, Greenock in 1908 and Alice still had family in the town.
A newspaper reported -

"At the graveside a simple but impressive service was conducted by the Rev W J Nicol Service.  The chief mourners included Mrs Brooks, the widow and her sister Mrs McInnes, Mr Arnott representing the P & O Company and Mr Andrew Nimmo Town Clerk of Greenock."

However, it is obvious, from the wording on the grave marker, that Alice Brooks did not give up her views that her husband had been murdered.

That might have been the end of the story ….. but!

Five months later in November 1933 a Canadian journalist, Lukin Johnston (born in Surrey 1887) who had just interviewed the new German Chancellor, Adolph Hitler, boarded the steamer Prague for a trip from the Hook of Holland to Harwich.  On the afternoon of 18 November he was seen asleep on deck.  When the ship docked at Harwich, Johnston was not on board.
Lukin Johnston too had disappeared!

Once again, the family suspected foul play - in fact they have written a book about it -
"Rufus: The Life of the Canadian Journalist Who Interviewed Hitler" by Colin Castle (2014).
It's a very strange coincidence, but I don't suppose that either of these deaths will ever be explained now. 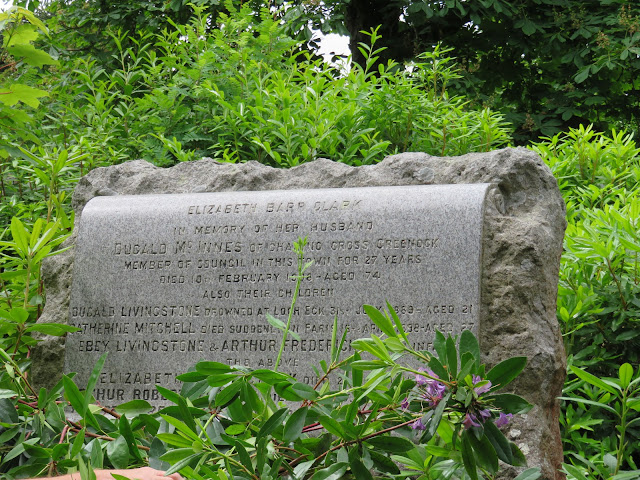 McInnes Family
Alice Jane McInnes was the daughter of Dougald McInnes (died 1908 aged 74), spirit merchant of Charing Cross, Greenock and Elizabeth Barr Clark who died in 1914.
Brooks Family
Cecil Brooks was the son of Benjamin Brooks of Stourbridge, West Midlands (then Worcestershire) and Georgiana Grazebrook of Pedmore who were married in 1869.

If you are travelling to Greenock you must visit the Fire Brigade Museum, or to give it its full title -
The Scottish Fire and Rescue Service Museum and Heritage Centre. 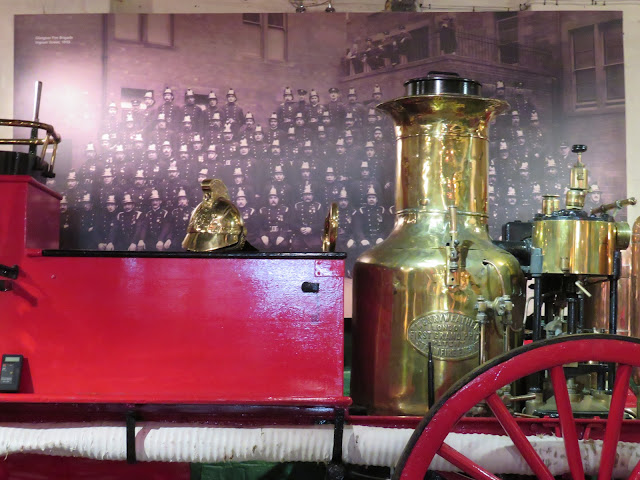 It is open when cruise ships visit Greenock and has welcomed firefighters from all over the world.  It is staffed by volunteers, former firefighters and is also open on the second and last Sunday of the month, but check the website for details of opening times. 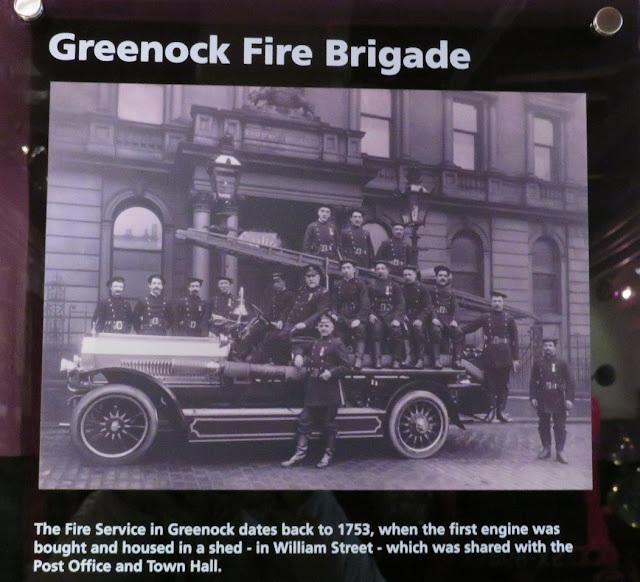 It is situated on Dalrymple Street just off Wallace Place in Greenock - right where the old fire station used to be when the Municipal Buildings were opened. 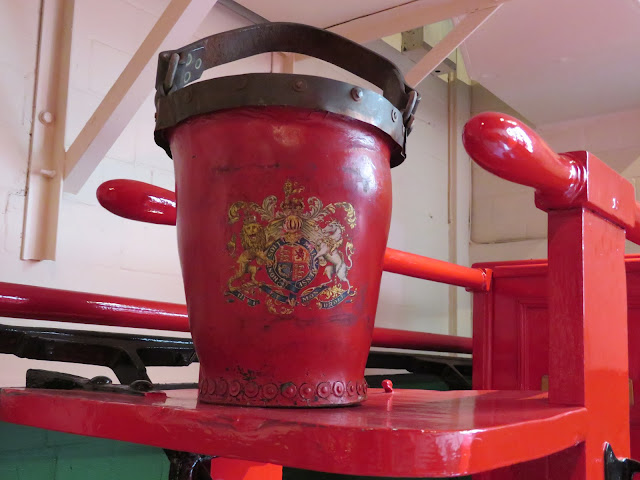 There's so much to see - old fire engines and equipment, lots of old photographs and some short films, and fire marks (showing that a building had fire insurance) from all over Britain. 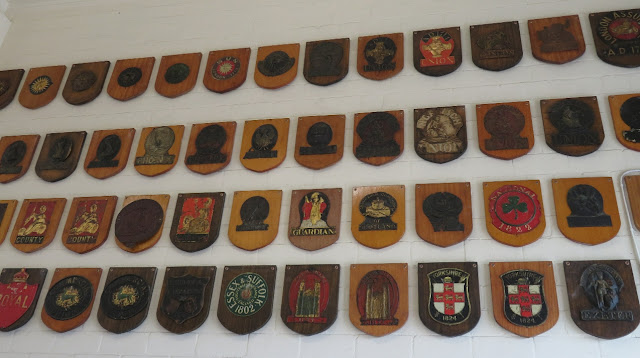 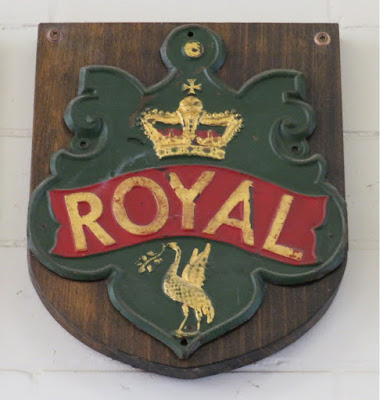 The staff are wonderful and if you have any questions they are happy to answer. 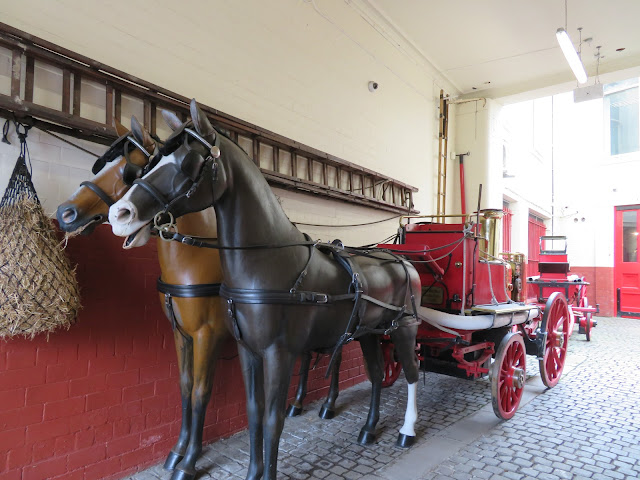 It really is one of the best places to visit in Greenock.  You can find their website here.
Posted by The Greenockian at 11:50 1 comment:

Email ThisBlogThis!Share to TwitterShare to FacebookShare to Pinterest
Labels: museum

This is a representation of Gourock's coat of arms on a lamp post outside the Gamble Halls, Shore Street, Gourock.  It combines the arms of the Stewarts of Castlemilk and the Darrochs whom I've written about in a previous post. 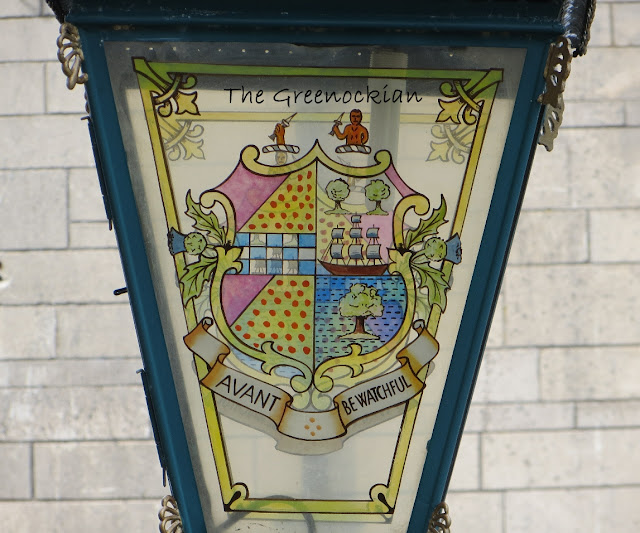 Gourock was created a burgh in 1694 and this is shown by the castellated top of the device.  As you look at the picture, the left side is an adaptation of the arms of the Stewarts of Castlemilk with a hand grasping a dagger. 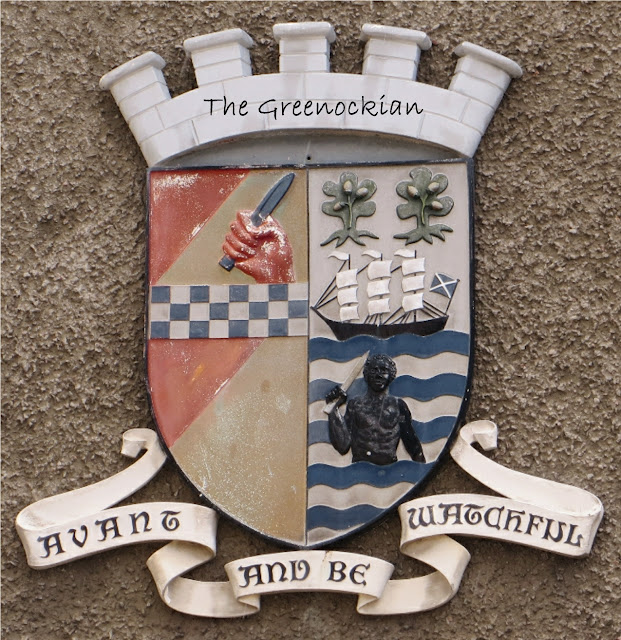 The Darroch side (right as you look at the picture) shows a three-masted ship with three oak trees.  The name Darroch is supposed to be a form of the Gaelic word for oak 'darach'.  This also includes a figure holding a club - perhaps a reference to the first Duncan Darroch's time in Jamaica. 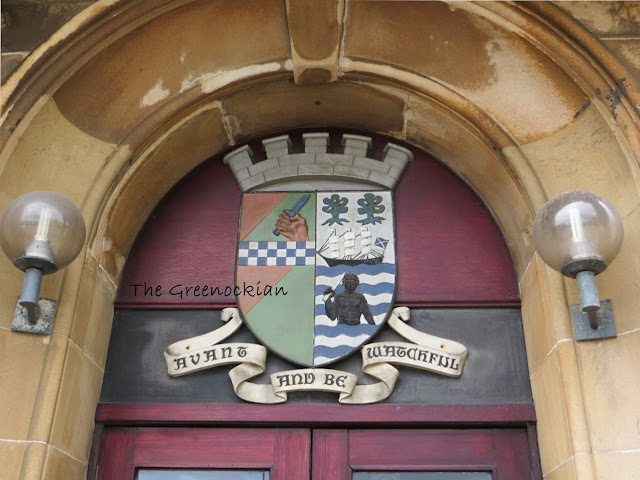 Gourock's motto a combination of those of the two families - 'Avant' (Stewarts of Castlemilk) and 'Be Watchful" (Darroch). 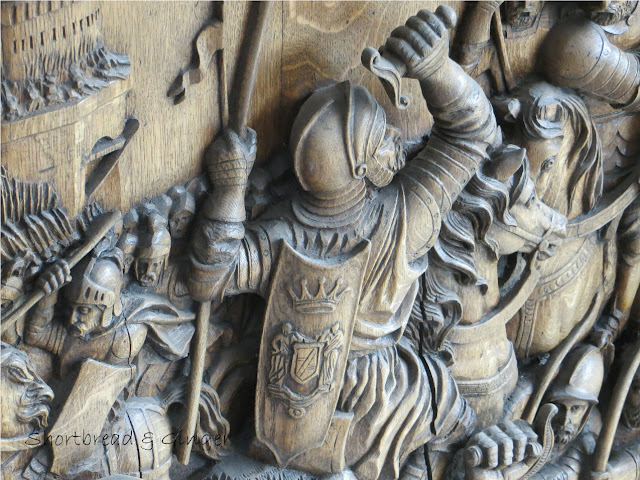 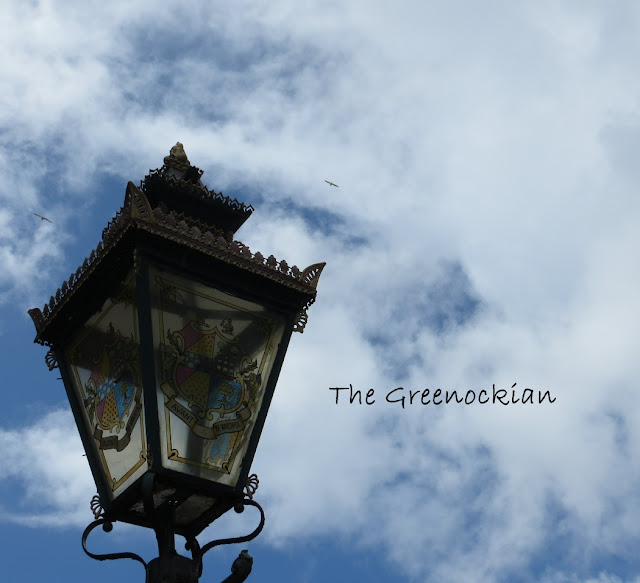 There was a time when decorated lamps showing town coat of arms like this were to be seen outside the residence of the local provost (mayor).  Port Glasgow still has its town lamp which you can see in this previous post.
Posted by The Greenockian at 10:23 1 comment: