William Allason's correspondence with his brother Robert (based in Port Glasgow) discussed in the previous post, indicates that they were involved in various trading enterprises with many of the leading Scottish tobacco merchants of the day.

One of these was Robert Bogle (1735 - 1808), the eldest son of prosperous Glasgow 'Tobacco Lord' George Bogle (1701 - 1782) of Daldowie, he was also a West Indies sugar trader.  Robert Bogle had moved to London and started the firm Bogle & Scott of Love Lane.  Another son, John served as a plantation factor in Falmouth, Virginia for Colin Dunlop & Co.  Robert Bogle's company failed in 1772.  He moved to Mount Craven sugar plantation in Grenada later returning to Glasgow.  (Much more information on the people mentioned can be found at the UCL (University College London), Legacies of British Slave-ownership database. 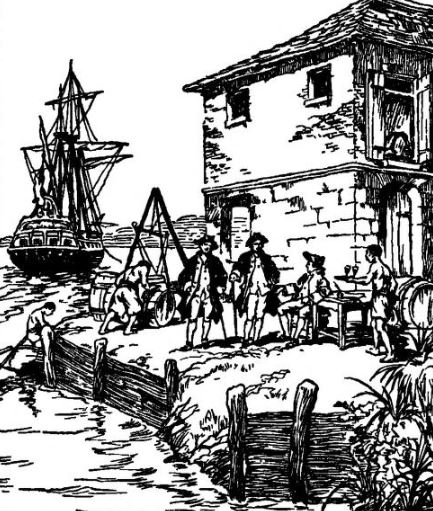 In a letter dated 25 February 1763 William writes about the end of the Seven Years War (known in America as the French and Indian War) 1754 - 1763, hoping that there will be an increase in trade.  He also refers to 21 hogsheads of tobacco he is sending to Bogle on the ship Carlyle, hoping it will be of good quality.  Writing to Bogle & Scott on 29 July 1764 he remarks that it is dangerous travelling inland and asking them to send him -

"… a pair Pistols about 30/- Price. let them be small, for the conveniency of carrying in a side
Pocket, and as neat as the Price will admit of …"

This is a wonderful example of how just about anything could be bought and sold by Scottish trans-Atlantic merchants.

Books seem to have been in great demand in Virginia.  William Allason sent an order to Glasgow bookseller James Knox on 3 November 1769 for 'sundry' books and stationery.  However because of a tax on imported paper, he tells Knox -

"… it will be necessary that the Package be said to contain only printed books, which you can   inform the Person who ships it off …"

On 22 July 1771 Allason sent a more detailed list of books he wishes Knox to ship to him.  Bibles, dictionaries, hymn books, books of sermons and spelling books are top of the list, but some specific titles are also mentioned - Pilgrims Progress, Robinson's History of Scotland along with other Scottish histories, Chattham's Political Conduct, various books of memoirs and magazines.  He also asks for various stationery items to be sent to him.

In 1772 William Allason married Ann, the daughter of Captain John Hooe.  After the death of her father, Ann inherited property called 'North Wales' in Fauquier County which William called their 'summer retreat'.  William oversaw the construction of a new mansion, work on which began in 1773, the house itself was not completed until after the Revolution.  The couple had one daughter (Polly) Mary Seymore Hall (1773 - 1853) who married Captain Robert Rose and inherited the property on her father's death in 1800.

William had been a prudent businessman but was continually trying to recover money owed to him by his various business associates.  He grew corn on his plantation and built mills on his estate which became extremely profitable during the War of Independence (1775–1783) when overseas trade was limited.  He owned slaves who worked the plantation and mills.  It was most likely slaves who transferred the goods to and from the ships to his store in Falmouth.

As well as trade, William also occasionally acted as factor for Lord Fairfax (Thomas Fairfax, 6th Lord Fairfax of Cameron, 1693 - 1782) of Greenway Court in Virginia, buying and selling slaves and importing household and luxury items from Europe.  Fairfax was a friend of George Washington and had extensive land holdings in Virginia.

William Allason also acted on behalf of Lord Dunmore (Lord John Murray, 4th Earl of Dunmore) 1730 - 1809, Scottish peer and the last colonial Governor of Virginia who returned to Britain in 1776 after defeat in the Revolutionary War.  Dunmore owed William money and was in no rush to pay up.  In 1883 William writes to Dunmore requesting payment of his account and also payment to Ninian Wyse stone mason, "... an honest poor man and has a large family altogether depending on his labour ...".  By 1888 he had still not recovered the debts!
William Allason corresponded with many important merchants and politicians in Virginia and elsewhere in colonial America.  His letters and accounts are an invaluable witness to events at such an exciting time in America's history and in the history of the west of Scotland.  They also reveal just how well informed merchants in Port Glasgow and Greenock were with what went on across the Atlantic.

Posted by The Greenockian at 09:33