I've another beautiful stained glass window to show you today.  It is also from the same church, Lyle Kirk, Esplanade, Greenock (the Old West) as the Edward Burne-Jones window I've described previously. 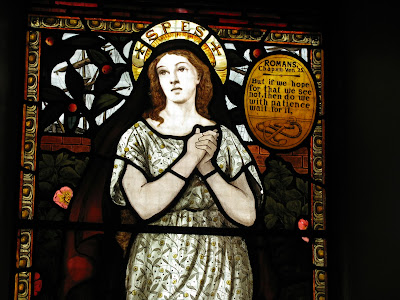 It is called "Hope" and is by the Scot, Daniel Cottier.  The little legend at the bottom of the picture reads:-


Daniel Cottier glass painter places this window in the Old West to the memory of his grandfather Archibald McLean master mariner of this Port who died in the year 1847 aged 80 years.


Cottier's grandfather, Archibald McLean married Mary Smith.  Their daughter, Margaret McLean who was born in Greenock, married a mariner, Daniel Cottier and had a son they also named Daniel. 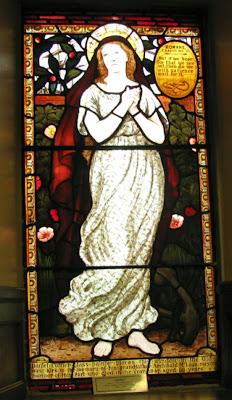 The window was made by the famous William Morris & Co and was put in place in 1884.
The window depicts a beautiful woman.  Around her head are the letters ESPS - this was the name of the Roman goddess of Hope.  She stands in what appears to be a walled garden in which are a few flowers.  Esps was usually depicted holding a flower, again this is a symbol of spring and with it fresh hope and new growth. 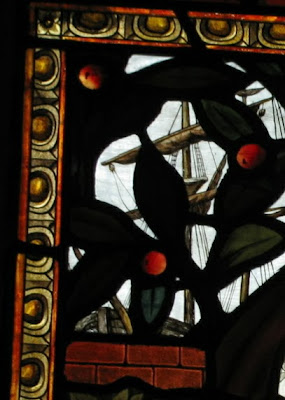 The upper half of the window has greenery, behind which can be seen the masts and rigging of a sailing ship - reference to Cottier's grandfather's occupation as master mariner. 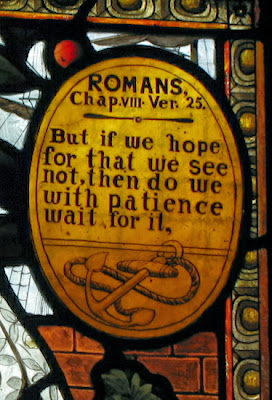 This seafaring imagery is also continued in the anchor (another symbol of hope and steadfastness) which is depicted in the little roundel which contains words from the New Testament book of Romans.  I am sure that for many of the mariners' wives and daughters, this would have been a comforting piece of scripture as at that time sea voyages lasted for many months, even years. 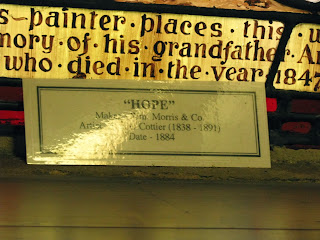 I think that it is a beautiful window, so peaceful and serene.


Daniel Cottier was born in 1839 in Glasgow and served his apprenticeship with firm of glass stainers, John Cairney & Co.  Later he moved to London and studied under the famous artist Ford Maddox Brown.  He returned to Scotland and was responsible for the stained glass for many churches.  In 1869 he founded Cottier & Co in Regent Street in London.  In Australia he joined with fellow Scot to start the firm Messrs Lyon, Cottier & Co who had premises at 333 Pitt Street, Sydney.  He also opened a branch in New York.  He collaborated with and inspired Louis Comfort Tiffany.  A man of many talents, he worked on decorative interiors and furniture and was an important art dealer.  Cottier died in Jacksonville, Florida in 1891.  His body was taken back to New York where he was buried in Woodlawn Cemetery. 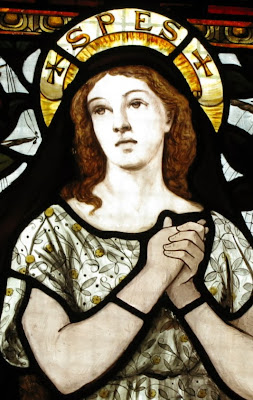 If you want to find out more, you can check out the website of the Cottier Theatre, the former Dowanhill Church in the west end of Glasgow, decorated by Cottier and William Leiper in 1865, and which has had extensive restoration work done recently.