Even in the latter days of his life which he spent in his sister's house in Westburn Street, Greenock, John Galt still showed a remarkable capacity for a good put down!
The Renfrew poet, Andrew Park (1807 - 1863) had the audacity to write a poem about Galt "Answers to the Stanzas of the Celebrated John Galt on the Calamitous State of his Health" which commenced;

Thou may'st be helpless, sad, and lame,
On one lone seat compell'd to stay,
And muse on youth and dreams of fame,
And hopes and wishes all away.

The verses go on to let Galt know what he'll miss
"Thou may not see the lark arise …",
and assure him that after he dies, his name will be remembered,
"But, Galt, thy name is not forgot!
Posterity shall hand it down …"
and finishes
Then cheer thee, Galt - thy worth, thy name,
And merits, shall live after thee;
And echo, with the trump of fame,
Shall sound thy requiem o'er the sea.

Galt's stinging reply -
"Sir,
I have seen this morning your obliging, and, I presume to add, sympathetic verses, which are not the less acceptable in coming from an author personally unknown to me.
It has been very flattering to me to have received so much kindness, of late, from the public press; for a man who has suffered from nine attacks of a strange species of paralysis, who has thrice lost his speech and once his sight, and now moves in continual dread, is really an object of compassion, especially one who has been very active.
I am much better, as this testifies; for I could not sign my name at one time; and the improvement came on me as quickly as the disease.  Ten minutes before I wrote this I was almost speechless.
I am, Sir, yours, very truly,
John Galt"
That made me smile - so often John Galt is thought of as a dour man, but I love the humour that flows through a lot of his work especially in characterisation.  But who was Andrew Park?  Paisley Museum and Art Gallery have a portrait of the poet.

Born in Renfrew in 1807, Andrew Park worked in a commission warehouse in Paisley before moving to Glasgow where he was employed s a  hat salesman.  Business failing, he moved to London, but returned to Glasgow in 1841 where he became a successful bookseller.  He spent some time travelling in Egypt.  You can read another example of his verse at the National Library of Scotland website.


He died in 1863 and was buried in Paisley Cemetery, over two hundred people followed his coffin to the grave.  It would appear that he was a very popular and convivial man. 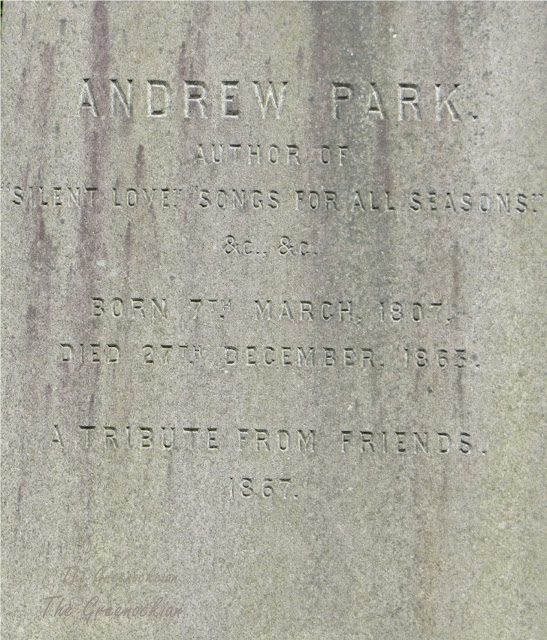 His obituary in the Glasgow Herald reads:-
"Death of Mr Andrew Park - Many amongst us will note, with much regret, the announcement of the death of Mr Andrew Park, who had attained local celebrity as an extensive poetical writer.  It is too much to expect that Mr Park will be remembered as a poet; but it is due to him to say that he produced some pieces in which pretty sentiments were worked out in pleasant lines.  He was a man of simple and inoffensive character, and his attractive social qualities and his fine musical voice rendered him a welcome guest at the social board."


John Galt was long dead by this time, but I think he may have approved of the wording!

(Poem and letter reproduced in Fraser's Magazine, June 1835)
Posted by The Greenockian at 08:02