William Simons a shipbuilder and his brother, Peter Simons (1785-1869) who was a sailmaker started shipbuilding in Greenock in 1810 under the name William Simons & Co.  In 1810 they built the brig Janet Dunlop (180 tons) which sailed to Quebec.  The ship was commissioned by James Dunlop - a Scot (from Glasgow) and who also had business with Alan Ker & Co of Greenock.  He was a rich merchant who had settled in Montreal and often travelled back to Glasgow where he had family. The ship was meant for trade between Scotland and Canada (via Jamaica).  On one of her return journeys to the Clyde she had a general cargo amongst which was flour, beef, tar, candles staves and hoops for barrel making.  It was probably through this contact with James Dunlop that the Simons brothers travelled to Canada in 1812 at the start of the British-American war.  (James Dunlop was also a major shipbuilder in Canada.)

The Simons brothers went to Ile-Aux-Noix situated in the Richelieu River which was the site of a Royal Naval Shipyard and fortifications during the British War of 1812-1815.  It was in an important strategic position near the Canadian border and gave access to the interior.  The Americans were trying to gain territory from the British and had positioned warships in Lake Champlain.  As a reply to this threat, the British build a shipyard on the Island and started building warships and gunboats there.  William Simons built the warship HMS Linnet, originally called Niagara which was launched in 1814.  HMS Linnet was a 16-gun brig and was commanded by Commander Daniel Pring RN.  The ship was captured by the Americans in 1814 at the Battle of LakeChamplain (also called Battle of Plattsburgh).  Another of Simons’ ships HMS Confiance was also captured in the same battle with Admiral Sir George Prevost on board.  (After the war, the Canadian shipbuilder John Goudie sent his son James to Greenock as an apprentice to William Simons to learn about steamship construction.)

William’s brother Peter Simons and his wife Margaret McNeil remained in Canada.  Peter’s son John opened a small general store at Lake Beauport, Quebec importing goods from Britain.  That business was continued by his son William and  grew into what is now a large department store business in Canada - La Maison Simons.

William Simons ran a busy and successful business, building a variety of ships for various merchants for trade all over the world.  In 1819 the ship Robert (316 tons) was launched in Greenock.  It was built for G & R Denniston & Co of Glasgow.  In 1825 the brig General Wolf was built at Greenock.  In 1826 the company started building steamships as well as wooden vessels.  One of the first was Fingal (290 tons) built for owners in Belfast.  The company also built yachts for private individuals.

William Simons died in Greenock in 1839 and was buried in Inverkip Street Cemetery.  On the death of their Mother Margaret in 1852, the family sold their extensive property in St Andrew’s Square and moved away from Greenock. 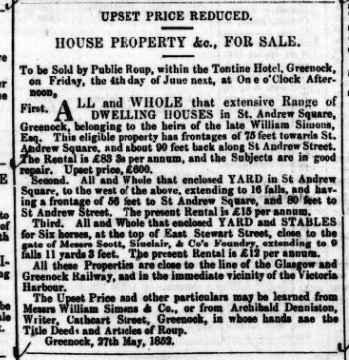 William Simons’ sons John and William successfully continued the shipbuilding business.  Their shipyard at St Andrew’s Square was required when the local authorities decided to build a large new harbour in the area.  The family business was moved to Whiteinch.  In 1860 the firm moved again to Renfrew – the LondonWorks.  William took on a new partner, AndrewBrown (1825-1907) of Renfrew.  They began to specialise in dredgers which were extensively used on the River Clyde and exported worldwide.  The firm were internationally know as innovators in all types of shipbuilding. 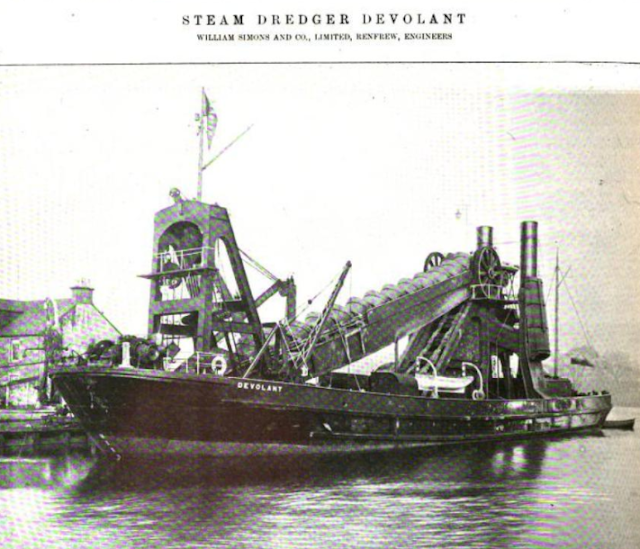 William Simons retired from the business in 1880.  In 1862 he had married Margaret Montgomery Neilson the daughter of James Beaumont Neilson (inventor and engineer) and his wife Barbara Montgomery of Queenshill, Tongland in Kirkcudbright.  William and Margaret Simons lived for a while at Yoker Lodge before retiring to Tighnabruaich.  William Simons took an active interest in public affairs in Renfrew and was a member of the Town Council.  He died at Sherbrooke, Tighnabruaich in 1902 and was buried in Greenock Cemetery.  The company continued in various forms having been taken over by Andrew Brown (William’s father in law) and two of his sons – William and Walter.  In 1959 it merged with G & J Weir and then with Lobnitz & Co Ltd and became Simons-Lobnitz Ltd, Shipbuilders.  The company ceased trading in 1964.

After the move to Renfrew in 1860, John Simons, eldest son of William Simons became involved with the Royal Renfrew Militia and began to take a back seat in the running of the company.  In 1861 he married Janet Crammond (daughter of Peter Crammond of Carnoustie).  They had two daughters Jessie and Joan.  John died at 7 Hunter Place, Monifieth Road, Broughty Ferry in 1888.  His brother, Peter, studied to be a Church of Scotland Minister but did not actually take up a charge.  He married Cecile Easton in 1865 at Meadowbank Place, Partick, Glasgow. (Cecile was the daughter of Dr William Easton of Glasgow and his wife Agnes Strang.)  They lived at Beechfield House, Bothwell Road, Hamilton with twins William Easton and Agnes Simons who were born in 1871 and Cecile born in 1872.  Peter Simons died in 1875 at Montgomerie Terrace, Cathcart.

Of the two Simons daughters – Mary married the Rev Peter Richardson of the Free Church, Dailly in Ayrshire in 1854.  She died at Edinburgh in 1903.  Her sister Margaret did not marry and died at Dunoon in 1907.

The Simons family were an important part of Greenock’s shipbuilding heritage.  It is such a shame that the gravestone of William and Margaret Simons in Inverkip Street Cemetery is in such a sad state of repair.
Posted by The Greenockian at 14:46