The awful fate of the ship Abeona

In January 1820 the ship Royal Charlotte, Captain Hobson, arrived in Greenock with sixteen survivors of a dreadful disaster on the other side of the world.  The ship Abeona (328 tons) had sailed from Greenock in October 1819 under the command of Lieutenant Mudge RN, with James Pritchard as master.  The Abeona had been chartered by the Government to take emigrants to Algoa Bay,  Cape of Good Hope, South Africa.  With a crew of twenty-one, she picked up fourteen passengers in London and then sailed to Greenock to embark 126 emigrants.  This was part of the 1820 Settlers Scheme.

Halfway through its voyage in November of 1819 about noon (co-ordinates latitude 4 degrees 30 minutes north and longitude 25 degrees 30 minutes west) there was a terrible fire on board the Abeona.  It would appear from the evidence of Lieutenant Mudge, Agent on board, that the fire started when Mr Duff, the first mate was dishing out the rum.  A spark from his candle ignited the spirits and other combustible material in the stores. 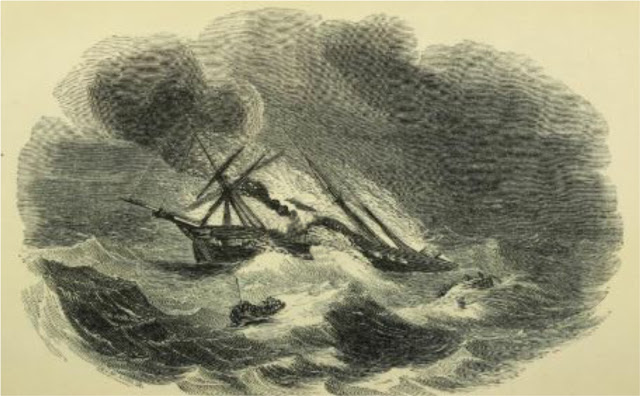 Three of the ship's boats, two gigs and a skiff were put in the water, the longboat could not be let down as fire had taken hold of its ropes.  The dense smoke forced passengers onto the deck.  Within ten minutes the whole ship was ablaze.  One of the survivors painted a vivid picture of the events -

"The shrieks of the woman and children, combined with the furious element travelling on to devour us, formed a picture of human misery that must rend the stoutest heart."

People were throwing themselves overboard to avoid the flames and with the hope of getting into one of the small boats.  The first mate, Duff - who due to the guilt he felt at being the cause of the fire, elected to stay and go down with the ship.  When being encouraged to jump into the water and try and save himself he is reported to have replied -

"I pity those in the boats the most; for with us it will soon be over, but they will be eating each other in a few days."

In his official report Lieutenant Mudge said that Duff, "was a most excellent, steady character ... and the sole support of an aged Mother."  He also said that Duff "had forgotten his wanted prudence" by causing a spark to cause the fire.

"A few minutes after I quitted the wreck the main and mizen masts fell; the flames, rapidly advancing forward, drove numbers of the poor wretches on the bowsprit, where it was our hard lot to behold them frantic, without being able to render them the least assistance.  You will judge how the boats were crammed; when husbands, who had wives and children still clinging to the wreck, exclaimed against more being received!"

"We kept close to the wreck till day-light next morning, in the hope that any vessel which might be passing would see the immense body of fire which continued raging till about three o'clock in the morning, when everything disappeared.  A little before daybreak, when thinking only on the awfulness of our situation, and the chance we had of reaching the Coast of Brazil in our miserable plight, with a few hammocks only to make sails of, a damaged compass, and with scarcely any water or provisions, the carpenter discovered a vessel close to us.  We seized our oars, and were on board of her in a few minutes."

He goes on to relate of one family's plight - the Barries from Provan Mill.  The parents were so anxious to save their children, the youngest just fifteen months old, that they threw them into the boats but did not save themselves their eldest daughter and another son also died.

Their rescue ship was the  Condessa da Ponte, Captain Joaquim Almeida, a Portugese merchant ship from Bahia (north-east Brazil) bound for Lisbon.  It sailed around the area looking out for any other survivors of the fire, but no others were found.  Eventually it sailed for Lisbon, Portugal.  Of the 161 souls on board the Abeona, just 49 survived.  On 21 December the survivors were landed at Lisbon and received by the British Consul-General, John Jeffrey, former MP for Poole.  The resident chaplain in Lisbon, Rev Thomas H Siely and his wife were also of great help to the survivors.

The newspapers report that ten of the children who were saved but made orphans by the fire were looked after by merchants at the British Factory at Lisbon who offered to pay for their upkeep.  The British (or sometimes English) Factory, Lisbon was a centre for British merchants living in Portugal and also for those trading with Spain, Portugal and South America.  It had its own church, burying ground and hospital and looked out for British interests in Portugal. Among the British merchants who offered to provide for some of the orphaned children were Mr Kean (James McLucky and George Barrie), Mr Munroe (Charles Coverly), John Watts Garland (Thomas Coverly), John Jeffrey, Consul-General (William McIsaac and Mary McIsaac), Sir Dudley Hill (Thomas Barrie), Major William Henry Thornton (John Bain and Lindsay Paterson) and Mr Bailly (Isabella Freeland).  From Lisbon the survivors were brought to Greenock in the merchant ship Royal Charlotte.

The news of the disaster led to a ballad being written that was sold around towns and villages by pedlars and chapmen.  Here's a couple of verses -

Three of the men who were saved, John McLaren (lost wife and four children),  John McLean (lost wife and one child), Robert Thomson (lost wife and five children) all petitioned the authorities to "furnish them with the necessary implements for agriculture" to allow them to go to South Africa as they had originally wished.  I wonder if they were able to put the past behind them and start again.

Posted by The Greenockian at 11:18