If you think of Finnart in Greenock what probably comes to mind is a quiet residential street, but once upon a time this area of Greenock was owned by men who were involved in some fascinating times in Scotland's history.

Finnart was once a separate estate reaching from the West Burn in what is now the centre of Greenock, all the way to Gourock.  In fact, Jardine's Burn was once called Finnart Burn (Greenock and Its Early Social Environment by William Auld, 1907.)  Early maps show a farmhouse and mill near the burn which starts at Greenock Cemetery, travels on through Greenock golf course and enters the Clyde at the Esplanade.  It is most covered over now.  There was also a quarry in the area which was later filled in.

Originally Finnart belonged to the powerful Douglas family and forfeited to the Crown in 1455 when the family fell out of favour with James II (the famous Black Dinner incident at Edinburgh Castle). The lands were given to rivals of the Douglas family.  The western part of Finnart was gifted to Stewart of Castlemilk (Finnart-Stewart).  Gourock Castle was the centre of their lands in the area.

James II gifted the eastern part of Finnart (sometimes written Fynnert) to James, first Earl of Arran (1475-1529) who, in 1510, passed the land and title to his illegitimate son Sir James Hamilton (1495-1540) (often refered to as Bastard of Arran).  He was legitimised in 1512.  James Hamilton of Finnart was a fascinating man.  He was at one time Steward of the Household and Master of Works to James V.  A great favourite of the King, he was responsible for restoration work on Linlithgow Palace and Falkland Palace as well as many others.  His home was Craignethan Castle.

He was also involved in much intrigue at court and was responsible for the murder of John Stewart of Lennox and a few others.  Eventually, perhaps swayed by rivals, James V became convinced that Hamilton was plotting against him.  He was arrested and quickly executed for treason in 1540.  His lands, including Finnart, were forfeited once again.

James V gifted the barony of Finnart to Alexander Schaw of Sauchie, whose own lands were just to the east of the Finnart .  He left Finnart with Wester Greenock to his son, John Schaw – a very well known name in Greenock.  In 1752 the lands were inherited by John Shaw Stewart. 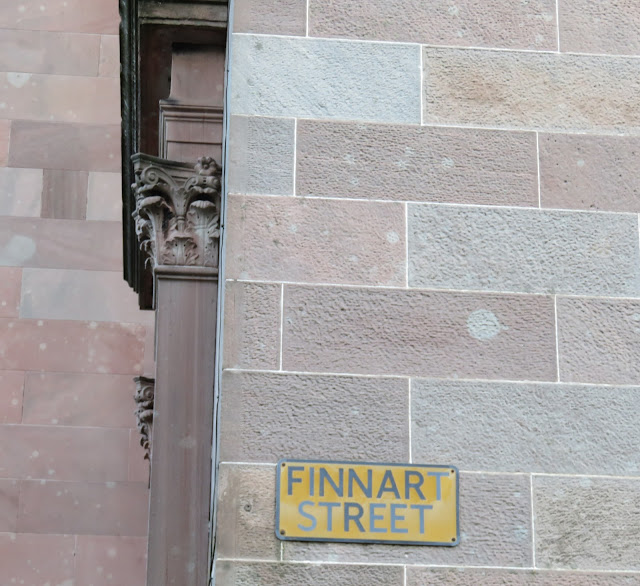 There are still a few reminders of Finnart in the west end of Greenock – there’s Finnart Street which runs from Nelson Street in the east to Newark Street in the west and contains many fine houses.  There used to be a Finnart School (now Ardgowan Primary School) and there was also Finnart Church on Madeira Street which later joined with St Paul’s Church to become Finnart St Paul’s Church.

Strange to imagine that this quiet residental area of Greenock had such an interesting history.

Posted by The Greenockian at 10:23

Email ThisBlogThis!Share to TwitterShare to FacebookShare to Pinterest
Labels: Finnart