As early as 1736 there was a ropeworks in Port Glasgow, made necessary by the increasing number of ships bringing tobacco and other goods into the port from America and the West Indies.  Ships needed ropes and canvas to keep “ship-shape” for their next voyage, so a ropeworks was not just a necessity but a valuable commercial enterprise.  Glasgow’s Tobacco Lords were quick to see the advantage in such an opportunity and it is hardly surprising to know that a couple of the most successful of these merchants were involved in the setting up of Port Glasgow’s Rope and Duck Company.  Two of the original partners were Lawrence Dinwiddie and Richard Oswald, Glasgow merchants who would later go on to be Lord Provosts of the city and who were formost among the city’s merchant elite.

The first manager of the Company was John Stevenson who corresponded with merchants at home and abroad in connection with the Company’s business. 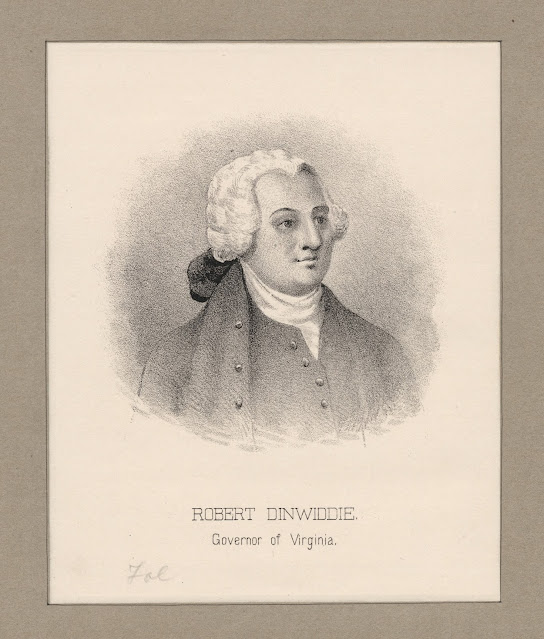 Lawrence Dinwiddie (1696-1764) had the advantage of having a brother, Robert Dinwiddie who was Governor of Virginia – very handy when dealing in tobacco.  Their father built Germiston House in Glasgow where the family lived.  Lawrence, who was Lord Provost of Glasgow from 1742 till 1744, had a wide variety of business interests.  Like many Glasgow merchants he had his own ships which travelled across the Atlantic bringing tobacco back to the west of Scotland.

The Dinwiddie brothers also set up the Delftfield Pottery in Glasgow (off what is now Brown Street) – a business which Greenock’s James Watt would later become a partner, advising on technical aspects of the works.  In fact James Watt lived in Delftfield House after his first marriage to Margaret Miller in 1764.  You can see a picture of the house on the Inverclyde Council website here.  (Decorative and everyday pottery items were in great by British merchants overseas and could be traded, with other household commodities, for tobacco and other produce).

The Port Glasgow Rope & Duck Company also traded extensively with merchants around the Baltic -sourcing supplies of hemp needed in the making of rope.  Four ships a year travelled between the Clyde and the Baltic.  As usual ships would leave Port Glasgow with cargoes of salted herring (and other goods requested by local merchants).  They would return with hemp, flax and sometimes tar.  Richard Oswald, one of the partners requested that some of the best caviare be sent back to Port Glasgow.

Port Glasgow at this time was at the epicentre of a global trade - the importance of shipbuilding would come later.   We should never underestimate just how important Port Glasgow was in Scotland’s 18th century international trade.

The Port Glasgow Rope and Duck Company later merged with the Gourock Ropework Company and take their name.

Posted by The Greenockian at 14:48