Quintin Leitch of Greenock was a man who took full advantage of the town's good Atlantic trading position on the west coast of Scotland, the new shipbuilding endeavours in Greenock and his family's trading links to make a name for himself as a successful townsman.  Born to merchant James Leitch and his wife Mary Orr in 1774, Quintin was the eldest of the family.  He had three brothers - James, Robert and William who all became successful businessmen in Greenock.  He also had a sister, Mary.  This is a memorial to him in the Wellpark Mid Kirk in Greenock. 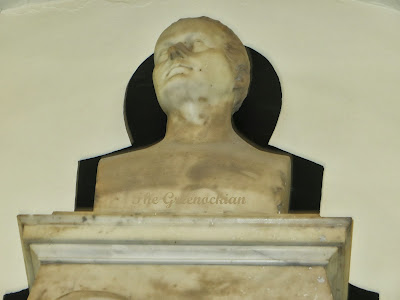 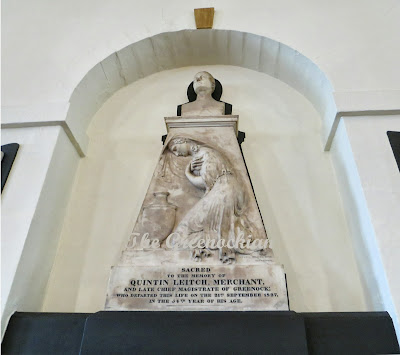 The memorial was described in 1828 by Daniel Weir as -


"... elegant monument to the memory of Quintin Leitch, an amiable and highly gifted individual, who was for six years Magistrate of Greenock, and who saw executed, during this short period, the greatest improvements which Greenock can boast of."


Previous to becoming a town official, Quintin Leitch went to sea in command of his own brig Clyde, built by Steele & Carswell at their yard in the Bay of Quick in Greenock in 1796.


In the early days, his family were involved in trade with the West Indies importing mahogany (amongst other things).  By 1805, he is listed in the local trade directory  living at Nicholson Street in Greenock.  By 1815 he is listed as being in business with this brother, 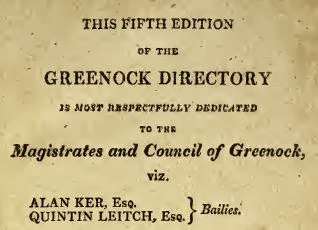 and also among the list of magistrates of Greenock.


Quintin Leitch was a friend of the great Scottish engineer Robert Stevenson and was with him in 1815 at the laying of the foundation stone of Corsewall Lighthouse near Stranraer.  Stevenson also named part of the Bell Rock "Leitch's Ledge" after a visit there by him in 1818.


He was heavily involved in local affairs and saw many changes and improvements to the harbours of Greenock, including the construction of the new Custom House, being present at the laying of the foundation stone in 1817.  From Views and Reminiscences of Old Greenock (1891) -
"the handsome Greenock Customhouse fronting the Old Steamboat Quay, the foundation stone of which was laid on the 2nd of May, 1817. It is interesting to note that “the ceremony was performed with Masonic honours by Sir Michael Shaw Stewart, Bart, [father of the present lord of the Manor], Provincial Grand Master of Renfrew and Dumbartonshires, in presence of Quintin Leitch and Robert Ewing, Esqrs., the Magistrates of the Burgh, and a large concourse of the inhabitants.” (Published by James McKelvie & Sons)

After many years of service to the town, Quintin Leitch died on 21 September 1827 aged 55.  His brothers and their children continued as merchants and public officials of the town for many years to come. 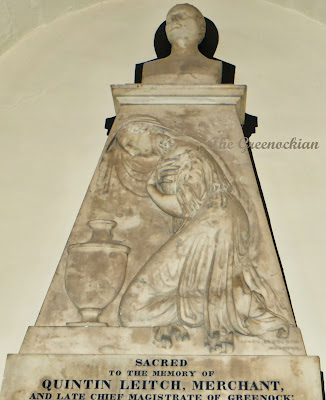 It is fitting that his memorial can still be seen today in the Wellpark Mid Kirk Church in Greenock.
Posted by The Greenockian at 11:46