It was all over the news yesterday that Captain Kidd's treasure has been found in Madagascar after 300 years.  For many years it was thought that William Kidd was born in Greenock, but new research gives his place of birth as Dundee.  Many of the older sources give his place of birth as Greenock. 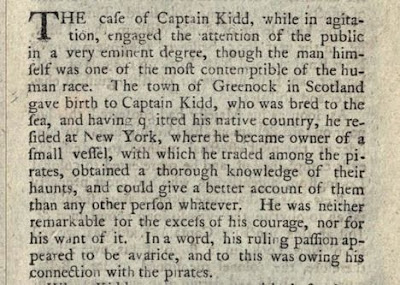 Reading Kidd's story, it is not difficult to come to the conclusion that his trial and subsequent execution were hardly fair.  Influential people looking out for their own interests contributed to Kidd's downfall. 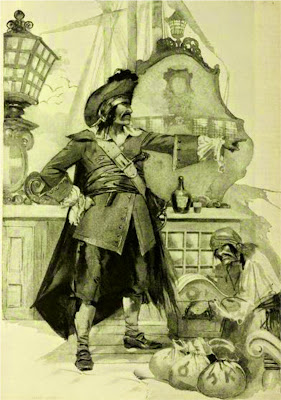 William Kidd was born in 1645 and went to sea as a boy.  Depending on which accounts you read, he became either a hardened pirate or a successful merchant.  He had taken part in the war against the French and had proved himself a excellent commander.  By 1691 he had married a rich widow, Sarah Bradley Cox Oort and was living comfortably in Wall Street in New York. 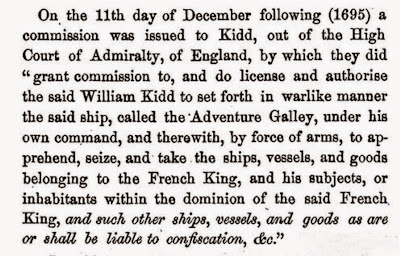 Piracy was rife at this time and Kidd went to London where he was given a letter of marque signed by King William III with a stipulation that ten percent of the loot acquired should be given to the Crown (1696).  Many eminent men were also backers, among them were Lord Somers the Lord Chancellor, Richard Coote 1st Earl of Bellomont, who had been appointed Governor of New York and Robert Livingston (a rich colonial official).  Kidd was fitted out with a new ship, the Adventure Galley (sails and oars) and sailed back to New York to begin his venture.  He and his crew were at sea for over two years and word got back to the authorities that they had become pirates themselves.  Kidd seems to have encountered many trials and difficulties at sea, running out of water and food which led to much resentment from his crew.  One crew member (William Moore) moaned so much that Kidd threw a bucket at him.  Unfortunately it fractured the man's skull and he died.


In 1689 Kidd captured an Armenian ship, the Quedagh Merchant (captained by an Englishman, Wright) full of riches from the East Indies, a very rich prize indeed, but hardly, it was argued, a legitimate one.  He took the ship to Madagascar and paid his crew many of whom promptly left him for another pirate captain, Robert Culliford.  Those left, burnt the Adventure Galley, which had by now become rundown and renamed the Quedagh Merchant the Adventure Merchant.  Kidd returned to New York, and rumours were started that he had left the richly laden ship in some hidden place and returned in a smaller vessel. 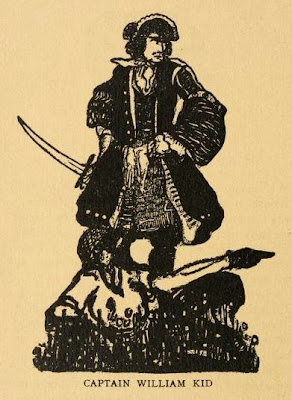 Kidd knew that he was a wanted man, but Bellomont persuaded him that he should come ashore to prove his innocence.  Kidd did as he was asked but was later arrested and imprisoned by Bellomont along with some of his crew.  Bellomont was also keen to find out what Kidd had done with the goods he had seized from the Quedagh Merchant, some turned up, but not all.  Keen to distance himself from the embarrassment that Kidd had now become, he had the men sent to London for trial.  Perhaps Kidd assumed that the powerful men who had sent him on his venture would back him once he returned to England. 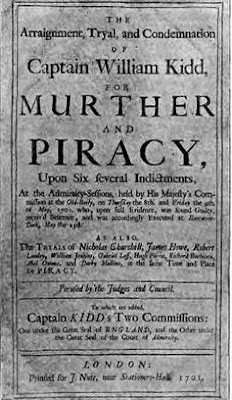 Meanwhile back in England, Captain Kidd's reputation as a pirate had gained dizzying heights!  Those who had once backed him were now keen to distance themselves from any hint of involvement with a notorious pirate.  Kidd was imprisoned at Newgate Prison in London.  He was brought before Parliament and questioned.  He was then accused of piracy and murder and sent for trial along with the men who had been captured with him.  Two witnesses were brought who gave evidence about the killing of William Moore, it is thought in return for being pardoned themselves.  He was found guilty of murder. 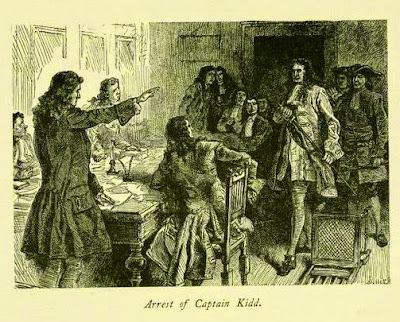 On the charges of piracy, there was the difficulty of proving this.  Kidd said he had commissions for what he had done, but could not produce proof of this in court - his papers had "disappeared".  Kidd protested his innocence till the end.  (The papers turned up 200 years later!) 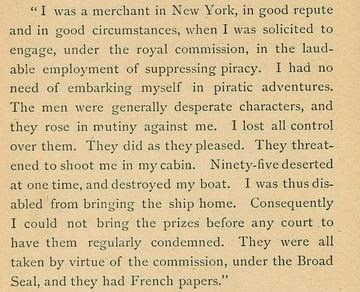 Captain William Kidd was hanged at Execution Dock in May 1701 - unfortunately the rope broke on the first attempt, but the second was successful.  His body was then hung in chains over the Thames at Tilbury Dock until it decomposed as a warning to others.  However, the legend remained and grew!  Over the centuries various people have claimed to have found Kidd's treasure and the debate over whether he was guilty of piracy continues.  The legend just gets better and better! 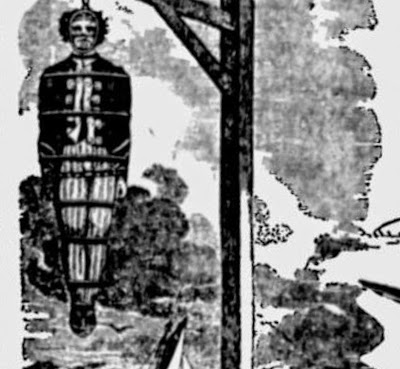 Posted by The Greenockian at 10:38