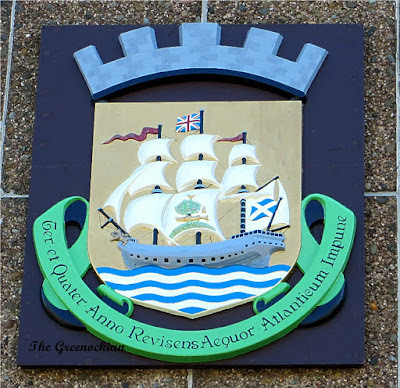 During Glasgow's great tobacco trading days, laden ships could not get up the River Clyde all the way to the city.  Goods had to be off-loaded at Greenock or Newark Bay (near where the castle stands) and then put onto smaller boats, lighters, to be transported up-river to Glasgow.  Fed up with this, in 1668, the Glasgow merchants got together and bought some land (18 acres) from the then Laird of Newark, Sir George Maxwell and created their own port originally called Newport Glasgow.  This was eventually shortened to Port Glasgow.

The port was run by Glasgow magistrates and merchants, so in effect was a little bit of Glasgow further down the Clyde.  Eventually the river was dredged so that bigger ships could get all the way to Glasgow. 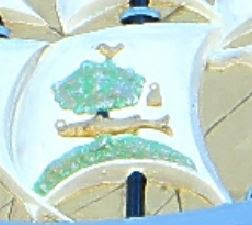 Glasgow's Coat of Arms is full of symbolism connected with the city's patron saint, Kentigern (also known as Mungo) and four of his miracles.  There's a little rhyme about it -

The tree that never grew - when Mungo was a boy he was once left in charge of the refectory fire.  Unfortunately he fell asleep and the fire went out.  When he woke up, Mungo broke off some frozen branches from a tree (originally a hazel), prayed over them and they burst into flames, thus relighting the fire.
The bird that never flew - is a robin which was a favourite of Mungo's tutor, Saint Serf.  Some jealous boys killed it and Mungo brought it back to life.
The bell that never rang - Mungo is supposed to have brought a bell, a present from the Pope back to Glasgow from Rome.
The fish that never swam - a salmon with a ring in its mouth.  This comes from a legend of a Queen who gave a ring, which had been a gift from her husband, to her favourite knight.  Her husband, the jealous king, took it from the knight and threw it into the River Clyde.  The King demanded in front of the court that his wife produce the ring.  She of course could not.  But St Mungo asked one of his monks to bring him a fish from the river and there, in its mouth, was the ring!  Thus the Queen was saved from dishonour.


Glasgow's motto now is - "Let Glasgow Flourish" which is the shorter form of the original motto "Let Glasgow flourish by the preaching of the Word" which is supposed to have been said by St Mungo. 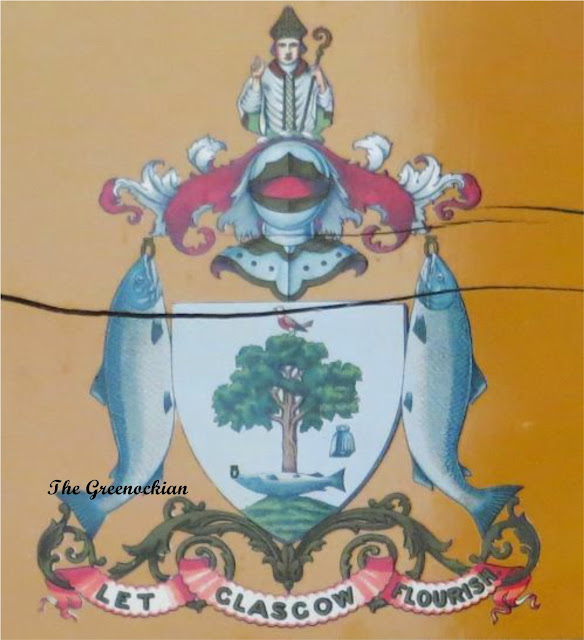 So, two coats of arms for the price of one!

Posted by The Greenockian at 08:57