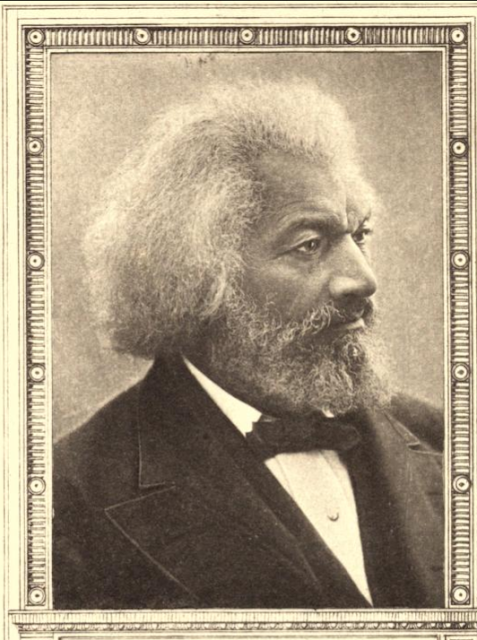 Frederick (Bailey) Douglass was born into slavery on the Aaron Anthony Plantation, Maryland in 1818.  A later owner was a Captain Thomas Auld of Baltimore.  In 1834 he was sold to a farmer in Talbot County, Maryland known as a “slave-breaker”.  In 1838 Douglass escaped to New York City.  That same year he married Anna Murray and they lived in New Bedford, Massachusetts.  The couple had five children.

Still classed as a “fugitive slave” Douglass toured Britain and Ireland in 1845-46 talking about his experiences of slavery and espousing abolition.  He was accompanied by James Needham Buffum (1807-1887), American abolitionist and George Thomson (1804-1878), British anti-slavery activist.  Douglass seems to have been a great orator and won many supporters in Britain.

Send Back the Money!
Another aspect of Douglass’ speeches in Scotland was to encourage the newly formed Free Kirk to return money it had received from churches in the American south. 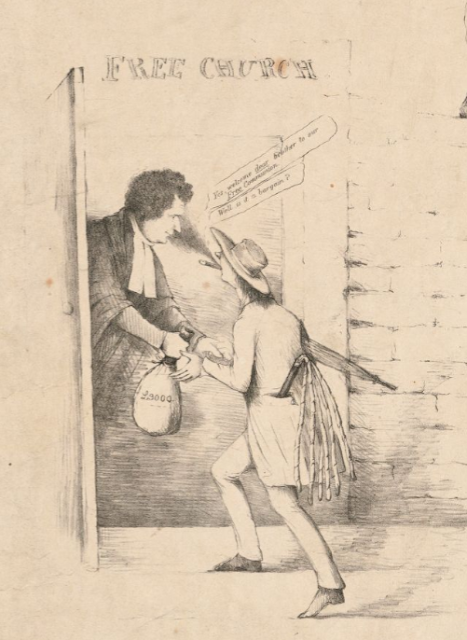 In Scotland 1843 was the year of the “Disruption” in the Church of Scotland.  Many ministers and members of the Church were demanding that congregations be allowed to choose their own minister.  In many parishes it was the local landowner who had the power to choose the minister, often against the wishes of the local people (patronage).  Led by Dr Thomas Chalmers, many protestors walked out of that year’s General Assembly in Edinburgh.  They set up their own church – the Free Church of Scotland.  However, the new church needed money to support its activities and so a SustenationFund was set up to receive donations – mostly from its new congregations.
As a fundraising exercise, representatives from the new Free Church were sent to America to raise money.  Donations of about £3000 were raised from churches – some from congregations in the South which included slave owners.  “Send back the money” became a popular campaign to encourage the Church to send this money back because of its associations with slavery.  The money was never returned.

In 1847 money was raised by his British supporters led by AnnaRichardson (Quaker and abolitionist) to buy Douglass’ freedom from slavery.  He returned to the United States.  He became editor of the “North Star” newspaper and gained a reputation as an abolitionist and supporter of emancipation.  He later edited his own "Frederick Douglass' Paper".
In 1858/59 John Brown tried to involve Douglass in his planned raid on the federal arsenal at Harper’s Ferry, Virginia.  Douglass declined to take part but was implicated nonetheless.  He set sail for Britain on a speaking tour. 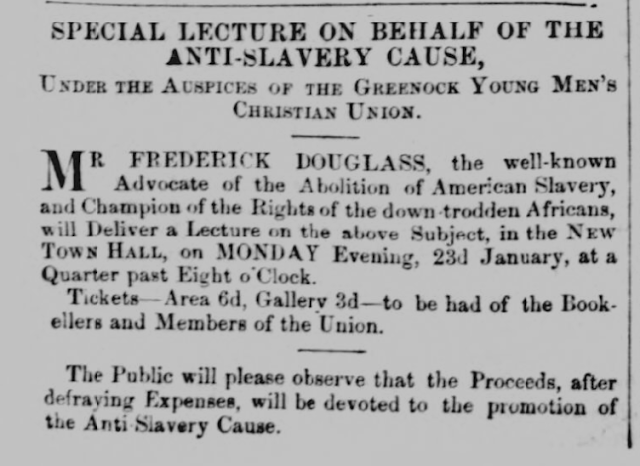 Douglass returned to Scotland and spoke again in Greenock in January 1860 (just before the American Civil War).  He had been invited to Greenock by the Young Men’s Christian Union.
A report in the Greenock Telegraph stated –
“Last night, Mr Frederick Douglass, the celebrated champion of the rights of his enslaved        brethren, delivered a most eloquent lecture, in the New Town Hall, on the various aspects of American slavery, showing its intensely criminal nature, and its blighting and degrading influence, not over the slave alone, but over the political and religious systems of the Americans themselves.  The hall was well filled, and ex-Baillie Grey occupied the chair.”

Douglass again returned to America where he had meetings with Abraham Lincoln.
His wife, Anna died in 1882.  In 1884 he married Helen Pitts, an American suffragist (1838-1903).  Frederick Douglass died in 1895.

Posted by The Greenockian at 17:14