John Wesley preached both in Port Glasgow and Greenock.
John Wesley (1703-1791) is well known for his evangelistic revival within the Church of England which was called Methodism.  What is perhaps less well known is that he preached several times in Greenock and Port Glasgow.  Wesley undertook several tours of Scotland preaching in most of the major towns. 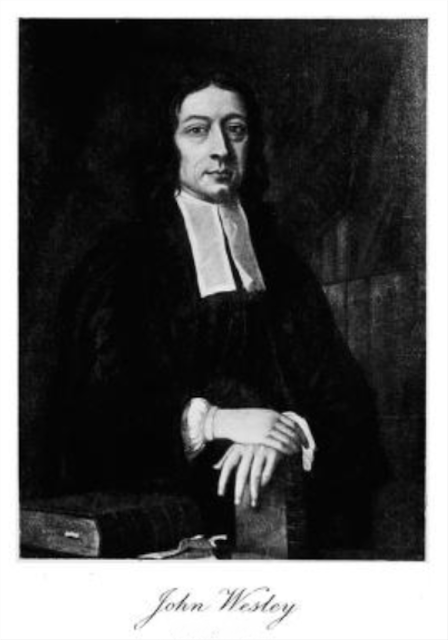 His first visit to Port Glasgow was on Tuesday 21 April1772.  After preaching in Greenock in the morning he arrived in Port Glasgow which he described as "a large town, two miles east of Greenock.  Many gay people were there, careless enough, but the greater part seemed to hear with understanding."

He returned to Greenock to preach in the evening and was again in Port Glasgow the next morning when he preached at the Masons' Lodge.  He wrote in his journal "The house was crowded greatly; and I suppose all the gentry of the town were a part of the congregation.  Resolving not to shoot over their heads, as I had done the day before, I spoke strongly of death and judgment, heaven and hell.  And there was no more laughing among them or talking with each other, but all were quietly and deeply attentive."

Wesley also visited the town in May 1774 when he preached (both in the morning and the afternoon) in the parish church .  Again his subject was death and judgement In the evening he preached at Greenock where the meeting attracted a large audience.

The New Parish Church building dates from 1823 but there was a previous building on the site - a cruciform shaped church.  The Masons' Lodge is still standing ... just!  It is being renovated and is in a sorry state at the moment.  It was built in 1758 as Lodge Cumberland Kilwinning 217.  The former Town Hall was built a few years later.  The Lodge continued until quite recently while the rest of the building latterly known as the George VI Club was used by the Old Peoples' Welfare Council.

Hopefully the buildings, the oldest in Port Glasgow after Newark Castle, will be properly restored.

Posted by The Greenockian at 10:31