I ended my last post wondering about the stories Customhouse Quay could tell.  Perhaps this is one escapade from  August 1859 it would be better to forget! 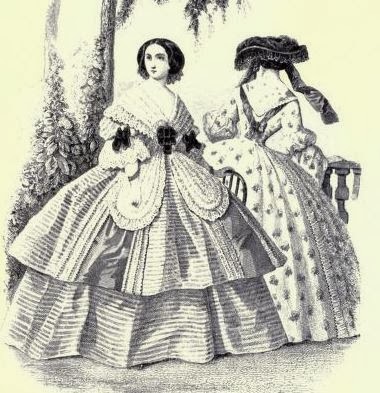 Yes - the unfortunate woman's crinoline became detached - how embarrassing!  But how funny that some little scamps captured it, and attached it to a steamboat to be towed away goodness knows where! 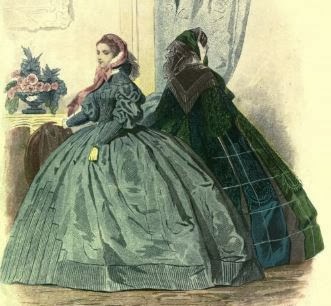 The fashion for crinolines reached its height (or should I say width) by the mid 1860s.  While they were fashionable, they attracted a lot of criticism - mainly from male commentators.  One imaginative writer in 1858 wrote an amusing, and decidedly tongue in cheek, article entitled "Crinoline for Criminals" in which he condemns crinolines for encouraging their wearers to theft, explaining that items could be easily concealed under the skirts! 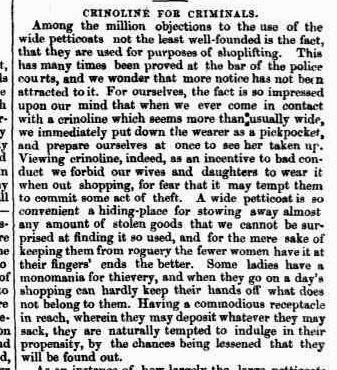 One paragraph in particular caught my attention:-
"Concealed beneath the skirts of a fashionable dressed female were, the other day, discovered by a vigilant detective the following choice proofs of her propensity to plunder;"
A vigilant detective, eh??!!


Death by crinoline was not uncommon, the unruly items could be caught in machinery and drag their unfortunate wearers with them - fashion victims indeed!  Boating accidents and high winds were also detrimental to crinoline wearers, as can be imagined.

I suppose the only people to gain from this particular fashion, aside from the satirists, were the fabric manufacturers - yards and yards of the stuff must have been used for each dress to cover such wide hoops!